Sleepy home of a National Treasure

Once the grounds of a local blacksmith residence, Kanayama Shrine was then later designated as an official village shrine by the Meiji government. Home to both New Year celebrations and the Bon Odori festival in summer with its attendant portable shrines and floats, the shrine offers plenty of local atmosphere.

A 7-minute walk from Musashi-Yamato Station on the Seibu Tamako Line.

Written with the characters for eitai - which means eternity - but actually pronounced nagayo, Nagayo Shrine is a tiny structure set deep within a wooded grove. The path in is lined with trees, giving this little shrine that sacred touch of primal piety. A 3-day festival is held each May, helping to celebrate the divine.

A 9-minute drive from Shin-Akitsu Station on the JR Musashino Line.

With its zenshuyo style innovative techniques, Shofukuji Temple is not only thought to be the oldest intact structure in Tokyo but its 15th-century Jizo hall has been designated a National Treasure. Open once a year, the temple's collection of Edo period jizo statues can be viewed by the public each November.

A 10-minute walk from Higashimurayama Station on the Seibu Shinjuku Line.

With its location by the shore of Tama Lake and the leafy surrounds of Sayama Park, Takubu Hikawa Shrine cuts quite the natural figure. With its sense of cosy isolation, the shrine complex shines courtesy of a small series of bright red torii gates and a pair of robust komainu guardian statues.

An 8-minute walk from Seibu-Yuenchi Station on the Seibu Tamako and Yamaguchi lines. 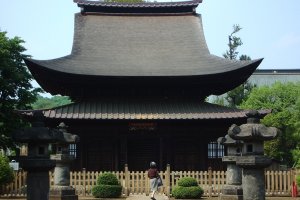 Elizabeth S 5 months ago
Shofukuji says that it's the home of the oldest wooden structure dating from the Kamakura period in Tokyo, tucked away there in Higashimurayama. What a treasure.
Reply Show all 1 replies

Sleiman Azizi Author 5 months ago
Right? And hardly anybody knows about it because we're all heading off to the brand name locations...
Reply
2 comments in total
Back to Contents