It's the details that count

A 9-minute no.51 or 56 bus ride from Kokubunji Station on the JR Chuo Line.

A solid bell tower is not the only feature to be found at Enmeiji Temple. The kouro incense burner is a stylish piece of work while the jizo statues offer all manner of features and expressions. Another feature, unique, is the stone lantern with inscriptions that was sent to the temple upon the passing of the Tokugawa shogun, Ienobu.

A 16-minute walk from Kodaira Station on the Seibu Shinjuku Line.

A relatively recent construction it may be but the flaming red of the Fudo-myo statue of Senzoin Temple really sets up a stunning image. The temple is also home to row upon row of jizo statues, and come the blooming season, a beautiful display of ume plum and sakura cherry blossoms.

A 19-minute walk from Kodaira Station on the Seibu Shinjuku Line.

Originally built in the 17th century, the very local Shosenji Temple features a beautifully maintained garden. The garden is home to many traditional landscaping elements including ponds, stones, statues and moss. The temple also features a two-storied niomon entrance gate, while its two nio guardians and bell tower are definite points of interest.

An 18-minute walk from Higashiyamatoshi Station on the Seibu Hajima Line. 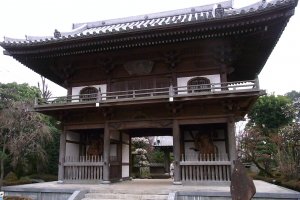 Kim a week ago
I can only imagine that Daisenji Temple is extra beautiful when the wisteria are blooming!
Reply Show all 0 replies
1 comment in total
Back to Contents