Sure, Tachikawa City may not be known for its temples or shrines, but that only adds to the curious surprise at what they offer. From truly lovely shrine grounds to giant stone tea whisks and stone teethers for babies, there is plenty to be charmed by. Here is an introduction to some of the temples and shrines of Tachikawa and how to reach them.

Featuring wonderfully maintained Zen-style landscaping with jizo and kannon statues lining the entrance path, Ryusenji Temple also hosts a joya no kane ringing of the bell ceremony each New Year. The temple is also home to a series of arakan stone statues that are impressively animated and full of personality.

A 15-minute walk from Musashi-Sunagawa Station on the Seibu Hajima Line.

Said to have been relocated in the early 20th century, Shoraku-in Temple is neat little temple with well maintained grounds. A number of jizo statues can be found here whilst the little stone statue of a scribe with his calligraphy brush is charming. The giant-sized stone tea ceremony whisk is another interesting feature.

A 1-minute walk from Nishi-Kunitachi Station on the JR Nambu Line.

The city's oldest landmark, Suwa Shrine was first established in the 9th century and stands in stark contrast to the modern leanings of the area. A beautiful romon double-stored gate acts as an entrance while inside the expansive compound lies the main shrine building and plenty of space for annual festivals.

A 10-minute walk from Tachikawa Station on the JR Chuo Main Line.

Tachikawa Suitengu Shrine is small shrine heavy on curious features. Aside from the rather detailed komainu guardian lion-dog statues, the shrine's curiosities include a cute stone gurard watching over a water well and a container filled with hagatame no ishi stones used as teethers for babies.

A 5-minute drive from Sunagawa-Nanaban Station on the Tama Monorail Line. 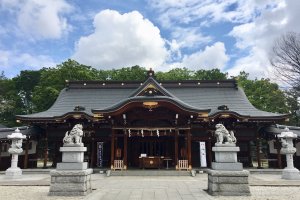