Gritty and hardcore its image may be but Toshima City Ward easily surprises with its entertainment, shopping and heritage. The city's temples and shrines, too, go that extra mile with some fascinating origin stories and reminders of unique historical traits. Here is an introduction to some of the temples and shrines of Toshima and how to reach them.

Rebuilt after the bombings of World War Two, Ikebukuro Hikawa Shrine was originally established in the 16th century. While it is now a simple shrine complex, what sets it apart from others is its fascinating fujizuka mini-mountain. Used in veneration of Mt. Fuji, fujizuka offer a convenient climb for worshippers unable to travel to the real Mt. Fuji.

A 7-minute walk from Shimo-itabashi Station on the Tobu Tojo Line.

With its tidy and well-maintained layout, Jurinji Temple typifies Tokyo's urban temple design. There is enough greenery to give the grounds a gentle touch, and with its bell tower and somon-style wooden entrance gate, the temple's ambience suggests that it is as old as its original mid-17th century heritage would suggest.

A 10-minute walk from Kita-Ikebukuro Station on the Tobu Tojo Line.

Home to a legendary therapy origin story, Kishimojin Temple is dedicated to the deity Kishimojin, once a demon who ate children until her conversion by the Buddha. Established in the 16th century, the temple is now recognised by Tokyo as a Tangible Cultural Property and includes scores of gingko trees with many around 400 years old.

A 5-minute walk from Zoshigaya Station on the Fukutoshin Line.

Another curious origin story sees Koganji Temple famous for its healing powers. According to legend, a woman swallowed paper with the image of a deity on it. As result, a thorn which had gotten lodged in her throat came free. These days, visitors come from all over to pour healing water onto the temple's statue in the hopes of curing their own ailments.

A 4-minute walk from Sugamo Station on either the Toei Mita or JR Yamanote lines. 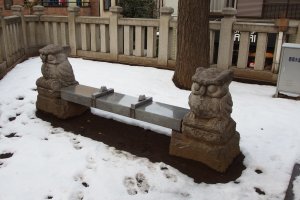