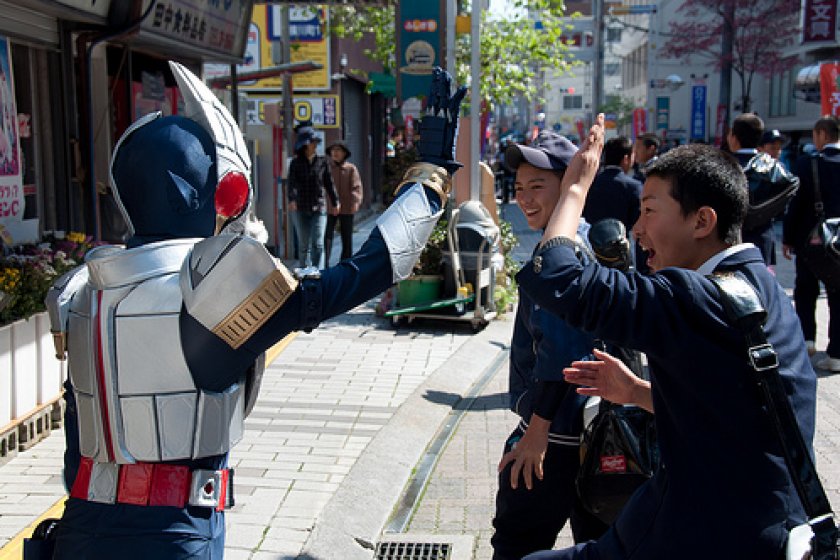 Located only a few minutes by train from Hiroshima station, a trip to Yokogawa is a fun place to visit, especially during its annual "Fushigi-Ichi" festival when the elderly, kids, anime heroes and large fruit mascots rub shoulders along the main street. Yokogawa's main areas are closed to traffic on this day and stores open stalls along the side of the road selling their wares or festival foods to enjoy. Last time we went, there were shops grilling meats outside, others slinging out bowls of noodles and big glasses of draught beer, while high calibre bars were serving a selection of wonderful wines. Many of the small shops were also open for business as usual and there were open areas set up in car-parks for flea market stalls.

The Yokogawa area - which has a nice mix of retro, Showa-era shops, small eateries, arty galleries and stores - has a very interesting and relaxed, low key atmosphere. There were a lot of people wandering around the area enjoying various performances including children's kagura, some maids singing about Hiroshima okonomiyaki and the yosakoi dance while others were bargain hunting; poking around the flea market stalls.

The "Wonder Carnival" is the Cosplay part of the festival. We didn't go down to the main venue, but we had a lot of fun watching people dressed up in the garb of their favorite anime characters wandering around the pedestrianized Yokogawa Shotengai and they were all more than willing to strike a pose for our photos as long as we asked and gave them time to strike the right pose- I was told that this is a significant aspect of being a Cosplay performer. Some of the costumes we saw were amazing and meticulously handmade, if you are a fan of Anime, you will likely be able to recognize the characters. Even without knowing anything about the characters they represented, it was still entertaining to see all the variety of costumes and poses. Some of our favorites were the Twin Stars, Dragon Ball and the Star Wars stormtrooper. But there were countless others that I can't even begin to describe. The group costumes are similarly impressive and if you give them a chance to pose for you there is quite a lot of preparation of hair and props before they are ready, but the final pose is quite a sight. See upcoming events and information about Cosplay in Hiroshima on the bilingual Cosquerade site.

Unfortunately, this year's festival was rainy, but the parades and stalls went ahead as planned despite the smaller crowds. It is special to see how the town changes during the festival, as festival goers fill the streets and browse stores that are normally very quiet. It is quite a spectacle to see the mix of local old ladies (who seem to make up 90% of the residents), Hapi-coat wearing festival staff, huge mascot tomato and other characters as well as the Cosplay performers in their outrageous get-ups all share the same street for a day.

At any time of year, Yokogawa is an interesting area to visit. The station front is charming with the historical Hiroshima streetcar trams parked in front. Go across the main street and grab a "God Burger" one of the area's longest running eateries, then stroll down the main street to peruse the retro shops, restaurants and bars. The town has a lot of character and is very down to earth and comfortable with itself.

If you miss this festival, catch the Flower festival a couple of weeks later in Golden Week, for more costumes, performances, food stalls and great matsuri atmosphere. 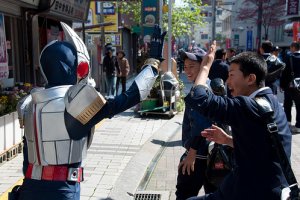 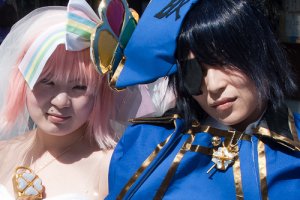 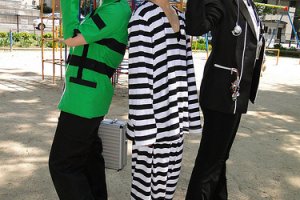