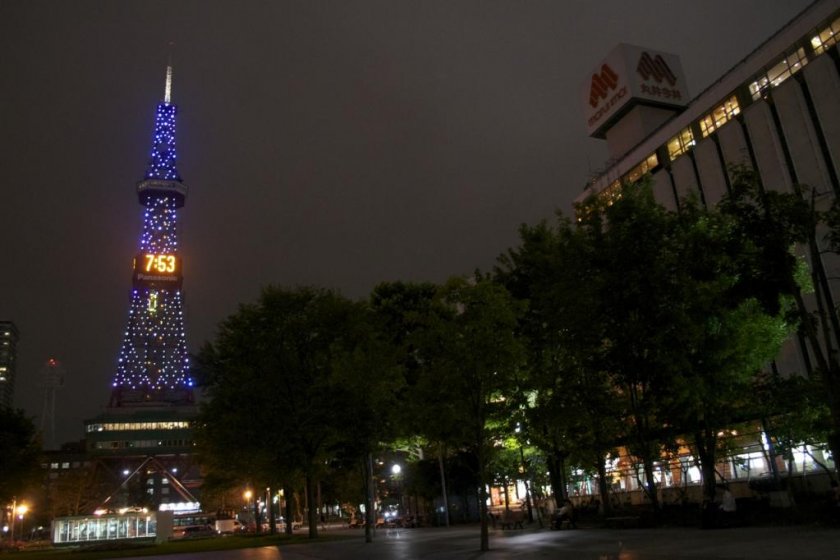 A central spot for views of the city

At night, the tower shines in various colors

The TV tower stands guard over Sapporo, marking the eastern plank of the several-blocks-long Odori Park in the center of the city. First built in 1957 for radio, the tower stands at 147.2 meters (483 feet) tall, offering views of the city and the surrounding mountains from an observation deck 90 meters (295 feet) off the ground.

Our group made way for the tower after a dinner out, looking for a night view that wouldn't be obstructed by the sudden onset of low-hanging clouds. The tower is easy to find if you're already in the city center — just head for Odori Park south of Sapporo station (a walkable distance, both above and under ground). At night the tower stands out even more with colorful lights.

The base of the tower features a a restaurant with outdoor seating (at least in the warmer months). As we approached, a lively group of suit-clad salary men were unwinding over beer and local favorite jingisukan, a grill-it-yourself mix of mutton and vegetables.

Inside the building on the first floor, we moved through the gift shop to the first elevator, which takes you to a second, larger gift shop, a restaurant, and the ticket counter for access to the observation deck, which will set you back 700 yen per person. After buying tickets, each group is ordered to somewhat mysteriously pose for a picture, which staff will try to sell you on the way out for 1,000 yen.

Once the elevator is full, a guide arrives and the minute-long journey begins, complete with some explanation about the tower's vital statistics. At the top, you're free to explore the views.

To the north, scan for Sapporo station and the JR Tower just a few blocks away, and Ishikari Bay in the distance. To the south, mountains provide a backdrop to the entertainment district of Susukino. But perhaps the most famous view is to the west, looking out over Odori Park and the mountains beyond, including a ski jump used in the Sapporo-hosted 1972 Winter Olympics.

If our group had any complaints, it would be the seemingly unnecessary third gift shop along the northern wall of the observation deck, which stands in the way of the windows and requires the lights to be turned on. The other areas are dark, making the night views more enjoyable.

After we had finished a few laps around and tried our best to get workable pictures of the scenery, we headed back down the elevator, said no thanks to the print of  the picture, and passed through the exit —  leading us, of course, back to a gift shop. 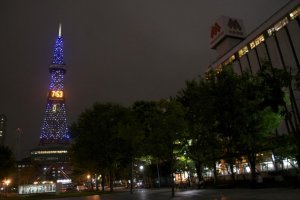 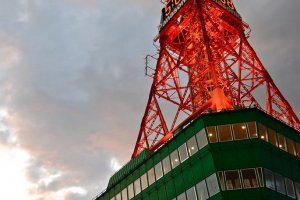 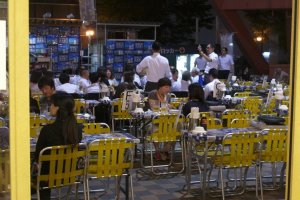