Embark on a shrine hunt before catching your next train

The Hanamaki-towa area is host to many cultural attractions, including the multitude of shrines near Tsuchizawa Station. All within an easy walking distance from the train station, these shrines are hidden gems that require some searching and wandering about residential districts. So, have your map ready in order to find them!

Route 222 is the main road that all of the shrines are located along. From Tsuchizawa Station, walk to the end of the road directly opposite the station until you reach the T-intersection. Route 222 is the perpendicular road.

The closest shrine to this T-intersection is Hayachine Shrine. Turn right onto Route 222 and then take the first left turn available. There is no road sign or any indication of the shrine’s whereabouts, so it may help to save its location beforehand. However, if you do decide to go shrine-hunting without cartographic materials, also keep an eye out for a rusty red fire hose box placed along the steel-plated right wall of a grey house that indicates where you should turn left. Note that the fire hose box will be hidden from your view when heading in this direction.

Hayachine Shrine is located on a hilltop and is hidden behind residential houses. After turning left from Route 222, follow the gravel road as it naturally curves upwards to the left and between houses. You will then see the white torii gates of Hayachine Shrine peeking through the trees after rounding two bends. Hayachine Shrine is a small shrine but also a peaceful and undisturbed setting that offers a beautiful view of the town below.

Moving to the next shrine, turn left when you return to Route 222 and continue in the same direction as before. A short walk down, you will find Inari Daimyojin situated along the left of Honmyoji Temple. The shrine and temple sit on a gentle slope not far up from Route 222, and can be easily identified by a succession of bright red flags lining the outer railings of the shrine. As with Hayachine Shrine, Inari Daimyojin is small, humble, and incredibly tranquil. For ¥300 you may also purchase an ema, a wooden plaque onto which Shinto worshippers leave prayers and wishes for the spirits or gods to receive. Ema is believed to bring success to your career, marriage, and health.

In the opposite direction of Hayachine Shrine and Inari Daimyojin is Kaburahachiman Shrine. Turn left at the initial T-intersection onto Route 222, and you will not miss the shrine’s massive red torii gate on the right-hand side. Enter through the torii gate and walk straight ahead until you reach the remaining torii gates in front of a long procession of stairs leading to Kaburahachiman Shrine. This shrine is the largest compared to Hayachine Shrine and Inari Daimyojin, and has a chozuya, or purification fountain. The atmosphere is very zen with a hint of eeriness, as the shrine is blanketed by shade of the surrounding forestry and filled with quiet traditional music emanating from within the main shrine. 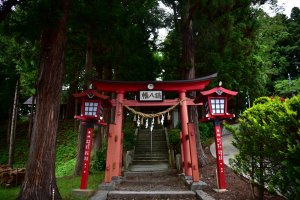 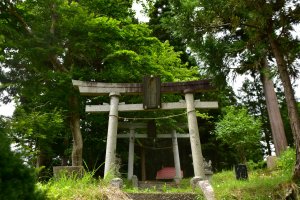 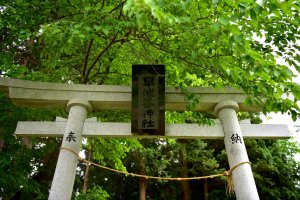 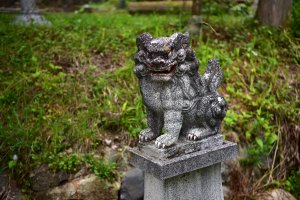 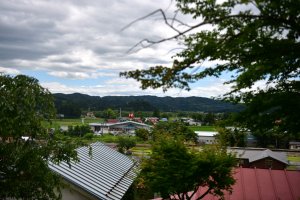 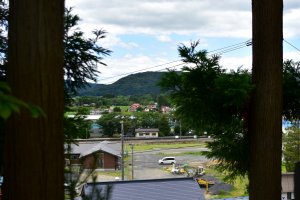