Visit the smallest of Japan's main islands, Shikoku, and you're bound to encounter pilgrims embarking on the Ohenro, an 88-temple trek around the island's four prefectures. Each temple has its own distinct characteristics and history, but one of the most important and unique is Temple No. 75, Zentsuji.

Located in Zentsuji town, Kagawa Prefecture, Zentsuji is the birthplace of Kobo Daishi — otherwise known as Kukai — one of Japan's most renowned Buddhist monks and founder of the pilgrimage. Kobo Daishi was born in and grew up at the site of Zentsuji's West temple and later constructed the East temple himself, making this complex a must-see for anyone with an interest in Japan's rich history.

Upon entering the Daimon Gate to the West Temple, visitors are greeted by the temple's main hall and an impressive five-story pagoda that acts as a beacon for those searching for the temple. But though Zentsuji's architecture is similar to that of other Japanese temples, this complex has its own unique gravity. A gnarled camphor tree said to be as old as Kukai stands behind plaques that call for world peace, and statues of Kobo Daishi populate the temple grounds.

Miedo, the hall where Kobo Daishi was born, stands in the middle of the West temple. Underneath, a pitch-black tunnel runs for 100 meters, the walls of which are covered in paintings of the Buddha and other religious imagery. Passage is a solemn affair, a time to reflect and purify one's heart.

Other sacred sites and relics connected to Kobo Daishi are numerous. A treasure museum on the West temple grounds houses Kobo Daishi's artwork, calligraphy, and other artifacts. The well where Kobo Daishi was first bathed as an infant remains intact at the site of the temple.

Zentsuji's enormity is not only felt in the area of the temple complex, but also in the monuments dedicated to Shikoku's most famous monk. Visiting the temple combines history, religion, and architectural achievement, making for a destination not soon to be forgotten.

Zentsuji Temple is a 15-minute (1.5 km) walk west of JR Zentsuji station, which you can reach by transferring at Tadotsu. By car, Zentsuji is a 10-minute drive from the Zentsuji interchange on the Shikoku Expressway. 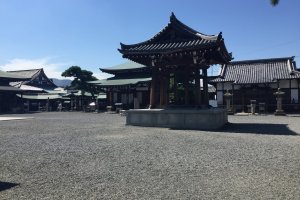 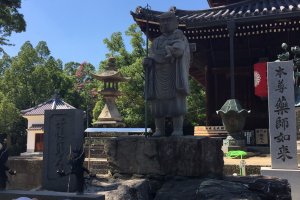 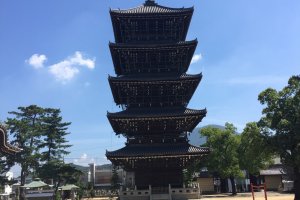