The Mairi Path, the Seven Temple Pilgrimage, follows Henro Temples 71 -77. Traditionally, it is a walk of grief, attributed to the start of the Mairi, at Temple 71 Iyadani-ji. Ancient belief or superstition has it that the dead still hang around the mountain, longing to be home. They are only allowed to do so on a certain day in Spring and another in Autumn. On their return to Iyadani-ji, their mourners walk the Mairi - with them, mind you - from Temple 77. They get to eat together and say goodbye at the approach to the mountain. However the Mairi also promises cures for the disabled, evident by many crutches, wheelchairs, etc., left behind. We are also told people who walk the Mairi will be happy.

I didn’t go up as it was inaccessible, but Temples 72-77 are God’s gift to an old tiger. They are near Zentsu-ji, Konzon-ji and Tadotsu railway stations, enabling me to visit them all in a few days.

Of these, Zentsu-ji Temple 75 is made much of as one of the three most important Kobo Daishi sites. The Great Monk was born nearby, and built Zentsu-ji itself, so all over the two sprawling compounds there were loads of memorials, shrines, and statues of him, to him, and the same for Buddha and Kannon. Kobo himself wrote about being shaded by the wonderful giant camphor trees. One striking thing were the rows and rows of statues of saints, or humans, each with a different pose and face, some ghoulish and macabre, found all over the grounds and around the temple.

Mandara-ji Temple 72 and Shusshaka-ji Temple 73 were reached by a longish walk through rolling farmlands and sweet smelling orange groves to the edge of a mountain. Both seemed popular with older devotees. I saw crippled old folks struggling up the steep steps of Shusshaka-ji.

Shusshaka-ji is located at the base of a mountain, with a view of the city, and levels to climb up. Both temples are very old, but this imbues them with depth, an air of veneration, possibly from their being venerated for generations, as if all the prayers and worship have seeped into them.

Koyama-ji Temple 74 was reached walking through a wet cement quarry road, with heavy trucks passing by. It was pressed against the mountain, with a clutch of old juzo at the back, silent, dark, and mysterious. Somehow, there is nothing so silent as silent juzo. There was a trail going up the mountain just behind, and the temple wood smelled of fragrant cedar.

Konzon-ji Temple 76 was large, with a beautiful old camphor tree in its grounds, and varied statues including a mean looking demon or two, Buddhist relics and religious items, and even the statue of an old cow.

Doryu-ji Temple 77 was brimming over with a profusion of very slender Kannon, many draped in Buddhist rosaries. Kannon seemed more celebrated here than Kobo, her statues stretching all around the temple. Doryu-ji was distinctive because the wood of the temple and its pagoda was aged and black stained, and I smelled cedar again.

The Mairi started off as a path of sorrow, and maybe it still is, but Henro are in clover, because it brings us 11 temples closer to Nirvana. Now ecstatic to see what the other Shikoku temples have to offer. 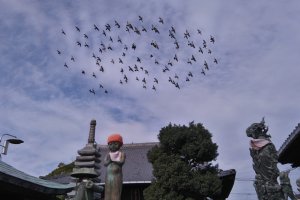 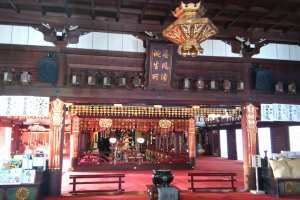 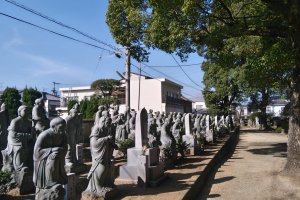 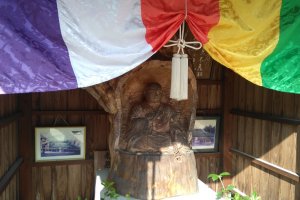 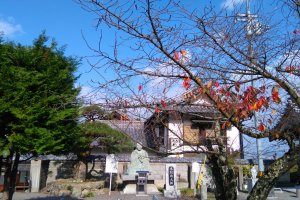 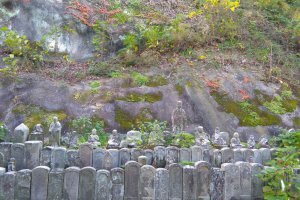 Kim 11 months ago
This pilgrimage is still on my to-do list in Japan. Maybe once my children are grown!
Reply Show all 1 replies