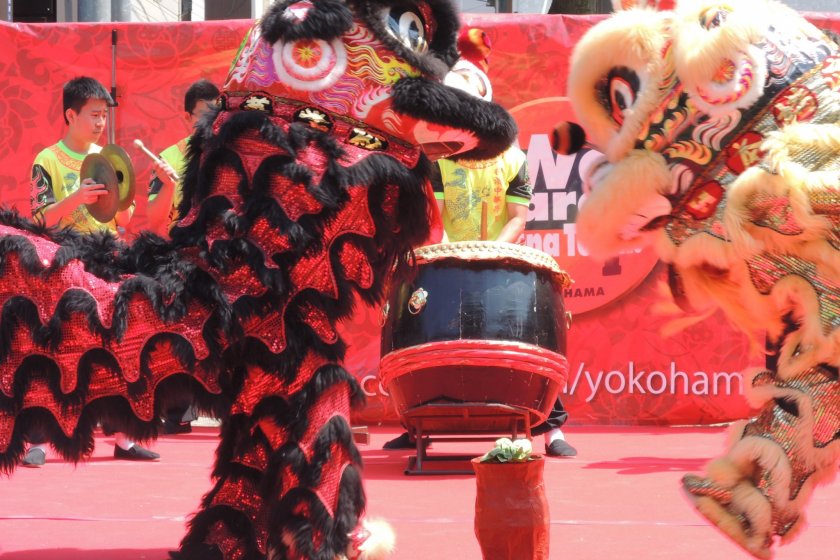 Earsplitting sounds of fire crackers, a bang of gongs, the fast tempo of drumbeats - Lion dances always give events a festive mood. Yokohama Chinatown, home of Chinese Japanese whose ancestors came mainly from South China, always celebrates New Year's day or some important events with this traditional performance. When I hear the sounds of Lion dances, my heat beats rapidly. Lion dances always cheer me up.

I've heard from someone that Chinese lion dances date back over 2,000 years and came to be performed in the current style during the period of the Qing dynasty(1644-1912). Legend has it that the Qianlong Emperor (1935-1796) had a dream of a lion-like sacred beast dancing, and the emperor had a pair of dancers perform the same dance in a lion's costume at court. Now the dance has spread across China and to other Southeast Asian countries. It is also performed in the Hawaii Islands and even in North American cities such as Vancouver and New York . The dance has been developed under the influence of martial arts as a ritual to pray for prosperity. The art is roughly divided into two forms: the Northern Lion dance and the Southern dance. Both dances are performed by a pair of dancers mimicking a lion's movements. Although there are numbers of variation, the Northern lions have a gold painted wooden head and costume. They often use a ball made of bamboo and move more playfully than the Southern lions. They are often shown as one of the popular performances at Chinese traditional circuses. On the other hand, the Southern lion has a horn on its head. They move more quickly and acrobatically like a Kung-fu master. The Yantze river, which runs through to Shanghai from the west part of China is considered the boarder between them. The lion dances have been brought to Southeast Asian countries, Hawaii and even to North America through immigrants from Southern China. So the Southern style dances are more popular than their Northern counterpart.  The dance  performed in Yokohama Chinatown is the Southern dance. The Northern dance is not performed as often here.

Lion dances are performed at Yokohama Chinatown on January 1, Chinese New Year's day and other important events such as the festival of Kwan Tai's birthday in August and National foundation day in October. The lions dance around the streets, and drop in on restaurants and shops to bring them luck and prosperity; this is known as "Choy Cheng" or Plucking Green in English.The style of the performance is changing to live up to the expectations of audience, evolving by applying more strenuous and acrobatic movements. Dances which were popular ten years ago are not performed nowadays. The dancers move in a crouch continuously, keep steps perfectly and endure immense heat under the costume. The lion is nearly 3 meters tall when it rises. The rear dancer must hoist the front one while maintaining balance. It is not an easy performance at all.

It is believed you can live healthily for a year if you are bit by the lions. Everyone comes close to the lions and asks for bites. Visit on New Year's day or other important events in the town. It is really fun to see the performance. And you may have a chance to be bit and have a healthy life for at least a year. 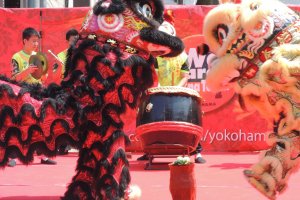 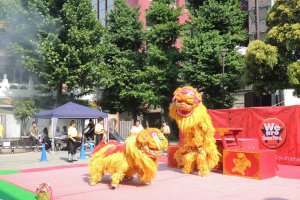 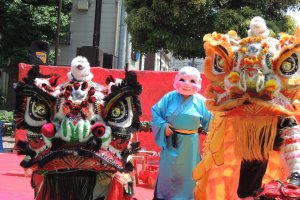 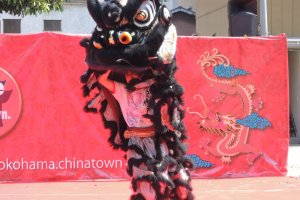 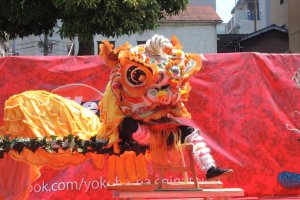 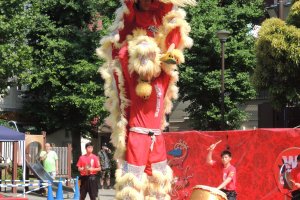