For most of the year, the small hot springs town of Tsuetate Onsen exists in relative obscurity, overshadowed by its arguably classier counterpart of Kurokawa Onsen in neighboring Kumamoto Prefecture. However, it's worth detouring to this tiny village in late April or early May if only to witness the town's popular koinobori (carp streamers) display to commemorate the May 5th holiday of Children's Day.

Over 3500 carp streamers are strung across the town's fast flowing river every spring. The streamers symbolize courage and strength, as carp are known for their tenacity and ability to swim upstream, even up waterfalls. The streamers range in color from reds and purples to blues and greens, with the occasional orange and yellow thrown in for good measure. Oddly enough, several streamers had already plummeted to the river below when we visited and all of them happened to be purple in color.

A cement walking path lines the riverbanks and makes for the ideal place to catch a first glimpse of the impressive sight. The walkway extends for about a kilometer on either side of the river. On both ends, as well as at certain points along the way, bridges cross the river - climb up to any one of these for a different perspective on the unique display. At the north end of the river, the last bridge also boasts a small shrine and many carp-shaped prayer plaques.

If you have extra time, it's worth poking around the town itself. While seemingly dilapidated, the streets are actually a fun maze of staircases and alleyways, with well-kept ryokan hidden among the older buildings. Tsuetate Onsen was an extremely popular town in the Showa Period (1926-1989) and while the luster has certainly worn off, the baths themselves are still worth investigating. Most ryokan offer day bathing options as well as comprehensive overnight packages.

If you're just coming in to see the streamers, there is a small parking area right next to the river with space for about a dozen cars. On spring weekends during April and May, you can also find food stalls offering typical festival refreshments like takoyaki and okonomiyaki.

Find out more about Tsuetate Onsen. 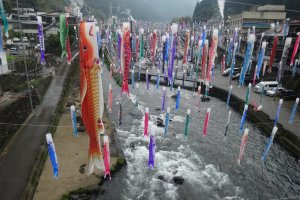 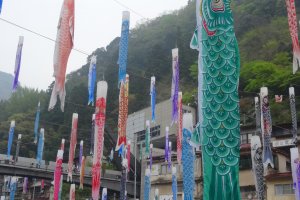 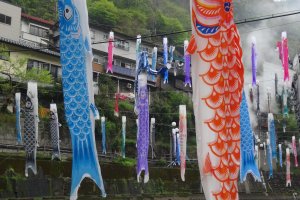 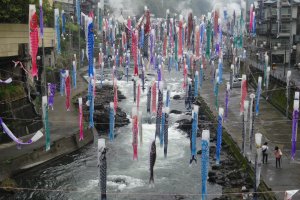 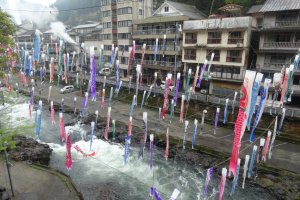 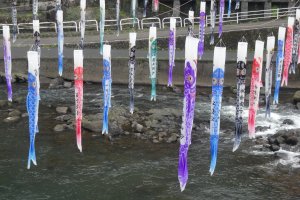 JapanTravel Guest 7 years ago
You are right Mandy this is very impressive, thanks for directing me to this. It is amazing to think about how much time and effort went into designing all of these 3,500 carp! Like you said to, the buildings are also very interesting. Fantastic photos!
Reply Show all 2 replies

Mandy Bartok Author 7 years ago
If the wind had been blowing that day, it would have been an even more impressive sight to see them "swimming", I think!
Reply

JapanTravel Guest 7 years ago
Haha yes very true. It might have been strangely realistic though!
Reply

Takako Sakamoto 7 years ago
What an impressive sight of 3500 carp streamers! This is the place you mentioned before, Mandy? Great photos of a nice place! But it looks like the wind was not strong enough? They are not 'swimming'!
Reply Show all 1 replies

Mandy Bartok Author 7 years ago
Yes, Takako, this is it! But you're right, the wind wasn't terribly strong at all that day. Every now and then a gust would come along, though, and it was such a cool effect!
Reply
5 comments in total