I have been to Kyoto many times however, never in the fall. The beauty of this ancient city is astounding and the reason why it is always crowded with tourists.

Known as the cultural capital of Japan, the city became a governmental seat in 794 and served as the capital of Japan for over 12 centuries. Many Kyoto shrines and temple have been designated as a UNESCO World Heritage Sites.

On December 1st Miwa and I boarded an early morning Shinkansen (bullet train) at Shin-Yokohama for the two-hour trip. Upon arrival we dropped off our luggage at the Miyako City Kintetsu Hotel, one of our favorites due to location at Kyoto station and their excellent morning breakfast buffet. Headed to the bus terminal and boarded number 205 for Kinkaku Ji Temple, known as the Golden Pavilion. You can use your IC cards on most of the city buses and trains.

Originally the home of the Saionji family, it was taken over in 1397 by the shogun Yoshimitsu, who built the Kitayama golden palace. It became the center for politics and culture, was a welcoming palace for Japanese Emperors and Chinese trading partners. Upon his passing he willed the palace to become a temple. In 1994 Kinkaku-ji was designated as a World Cultural Heritage site.

A 15- minute walk from Kinkaku-ji you will find the beautiful grounds of Ryoanji. The Kyoyochi Pond built in the 12th century was so colorful that I took many pictures from all sides. The stairway to Kuri the main Temple was also stunning. Upon entering we slowly walked past the Rock Garden as there were many people meditating. The garden was created by a Zen monk around 1500 and has 15 rocks embedded in white gravel. The grounds at Ryoanji Temple are vast and there is much more to see, however we were on a tight schedule with reservations for lunch back in central Kyoto.

Had to catch a taxi to make our 11:30 reservation at Teppanyaki Hoen restaurant inside the JAL Hotel Nikko Princes. This was their first day serving a special Christmas lunch course and I can truly say it was very special. There was so much food that I had to deny some dishes near the end of our course. The chef cooked everything in front is us from seafood, soups, salads, to flaming steak with every veggie imaginable. It was a delicious meal that I will remember for a long time.

After our lunch we walked a few blocks and boarded a train to Keihan Demachiyanagi Station. Then walked 15 minutes to Shimogamo Shrine. Miwa had a Kyoto Fall guide book, which indicated the best fall color sites and the hotel posted a current digital board of where the most vibrant colors could be found. There was method to our picking which places to visit on our first day. Established in the 6th century Shimogamo is one of the oldest Shinto shrines in Japan. It is also a designated UNESCO World Heritage site.

On the way back to the Station we walked through Kyoto Gyoen National Garden, home to Kyoto Imperial Palace. This 247-acre garden houses several historic buildings including the Imperial Palace, which served as the home of the Emperors for over 1000 years. The garden has over 50,000 trees and 100 species of birds with plenty of park benches making it a very peaceful setting.

Not far from Kyoto Train Station is Toji Temple. Built in 796 was one of three Buddhist temples allowed in the new Kyoto capital. Toji means east as it was the East Temple. We joined the thousands of people in line to await the 18:00 opening for the night lights. It was well worth the wait, especially around the ponds and the Pagoda. The five-story structure was built in 826, surrounded by colorful fall leaves that attracted the visitors like moths to a flame. No matter what time of year you visit Kyoto this UNESCO World Heritage Site is a must see.

Before heading back to our hotel, we strolled through Kyoto Station. It is very large inside with several attractions, one being the stairway up to the roof. There was a projecting mapping light show accompanied by Christmas music. A great ending to a long enjoyable day.

Once at Kyoto Station head to the Information center and obtain a detailed map or use their web site to create your Kyoto excursion. 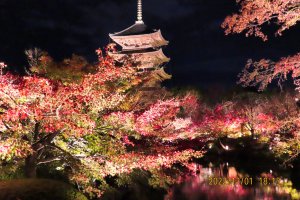 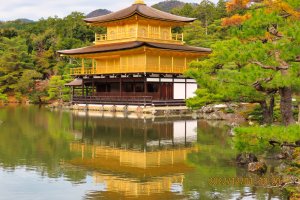 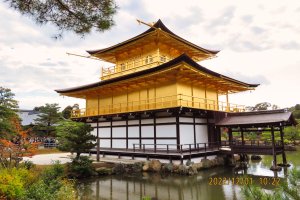 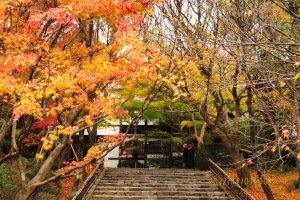 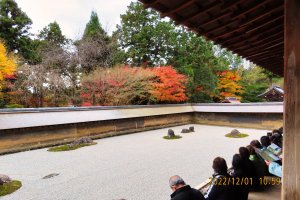 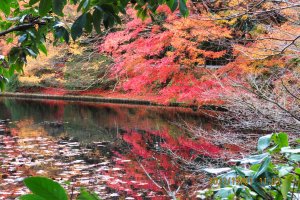