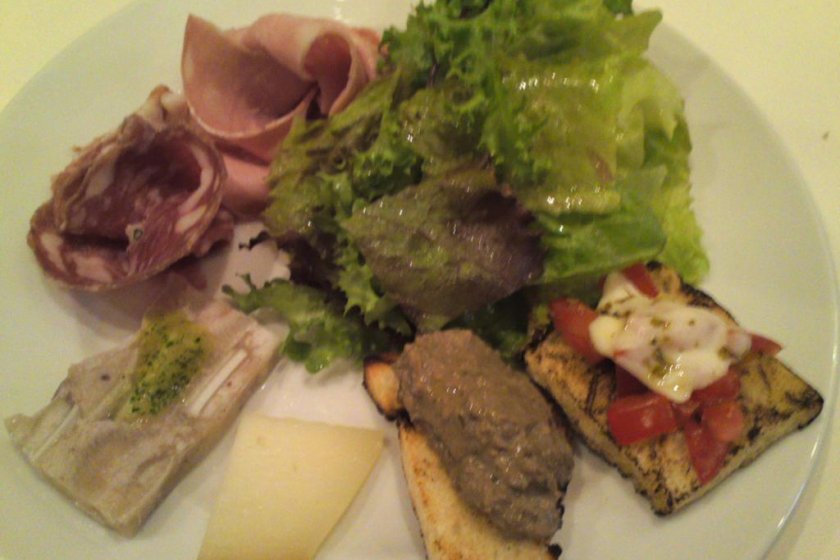 Chiara Bella, our lucky choice, means “beautiful light” in Italian, and after a full course meal that lasted a leisurely 3 hours and cost only 4,400 yen per person plus drinks (about half what one would expect to pay in Tokyo for similar quality), we were basking in Chiarra Bella’s warm glow.

Chef Fumi Kamada was a gracious host, working all by himself in the kitchen and assisted by a single waiter who had very little to do as Fumi came by with each dish and offered a friendly description of what it was. While my wife’s colleague-who arrived at 8:30 ahead of her husband-started with a beer, which many in Japan do at the outset, my wife and I went straight for the red wine as we did not want to ruin our appetite. Fumi asked what we normally drink, which happens to be cheap but delicious Spanish wine in my case or Shiraz in my wife’s, and came up with something warm and spicy from Italy that was perfect for what we were about to eat. Plus, it was only in the 3000 yen a bottle range, again about half of what one might pay in Tokyo.

After my wife’s colleague’s husband arrived around 9, we ordered. Actually, Fumi had told us on the phone that we could order a la carte, but he suggested we let him take care of it. Most diners do that here. And so Fumi was ready by the time the husband arrived.  A simple dish of pickled melon seasoned with dill, olives and the sweetest tomatoes I have ever eaten arrived, followed soon after by a salad plate that included home made liver paste, two varieties of Italian ham, a mild sheep cheese and a delicate terrine.

Following the antipasto and salad, we were treated to a creamy pea and green bean soup that even my wife enjoyed, which is a first since one of her least favorite foods is green peas. The food was so good, and it arrived at a pace that allowed us to savor Fumi’s cooking. But the wine was going fast, and though my wife and her colleague adjusted their pace accordingly, the two males in the group soon graduated to more wine, this time by the glass.

Next came deep fried fish, almost all of it locally sourced and bearing names I did not know having lived for 32 years in Tokyo. Only the deep fried cuttle fish came from outside Miyazaki, in this case Nagasaki prefecture. We thought the meal was drawing to a close when the spaghetti, thick and homemade, arrived. We had been there too long and were so satisfied that we hardly could expect more. In fact the spaghetti, a classic southern Italian recipe with garlic, tomatoes and sardines, was wonderful, but there came yet another dish, tender, flavorful pork filet from Miyakonojo, a town halfway between Miyazaki and Kagoshima.

The fact that almost all the food was locally sourced, including the vegetables, which were from Aya-cho, impressed us since my wife and I, living in Tokyo until March of 2012, had been ordering organic vegetables from that town for a year after the radiation release in Fukushima and the subsequent contamination of part of the food supply within a growing radius around the nuclear plants. Food that was delicious and locally sourced! What more could we ask for?

Alas, with a flavorful, homemade Panna Cotta that was flecked with citrus rind and accompanied by a small cup of espresso, the meal was drawing to a close. But not before Fumi brought me a glass of lemoncello he made himself from local Nichinan lemons. At the beginning of the meal I had been telling him that a number of years ago in Napoli the owner brought round several glasses of grappa and that none of the others in our part liked the stuff, so I had to down everyone’s glass and then crawl to my hotel, thankfully located close to the restaurant. So he must have figured I would be game for an after-dinner digestivo.

If you are not up for a full-course dinner, Fumi offers a smaller course of various dishes and wine if you arrive after 9 PM. Fridays, Saturdays and Sundays, lunch is also served for 1700 yen, including various hot vegetable dishes. For 2400 yen, lunch includes a main dish as well.

Directions: If you are coming from Yamagata-ya department store, cross over Takachiho-dori as you walk north along Tachibana-dori. You will soon see a Mizuho bank and an Oita bank. Turn right, going in the direction of Miyazaki station, and you will soon see it in front of you. If you are coming from Miyazaki station, it is about 760 meters. Walk west along Takachiho-dori past the post office, the Carino building and JTB until you come to a 7-11. Turn right and walk about one block. It is on your right. 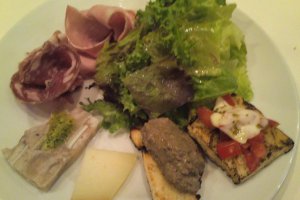 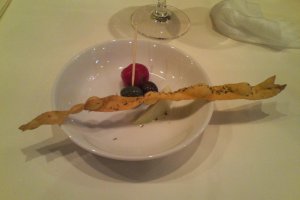 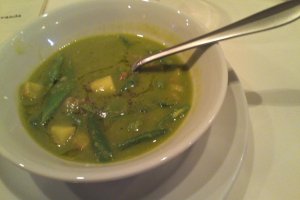 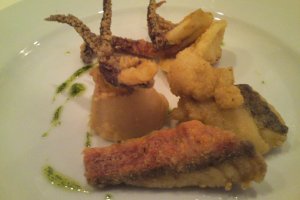 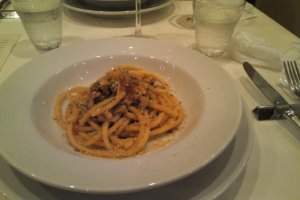 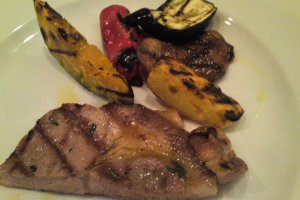