If you happen to be in the area of Toshodaiji, Yakushiji or NIshinokyo station in Nara, there is a small but interesting attraction worth checking out. In the old days, nagaya were described as houses that are joined together, or "long house" if translated from Japanese. Ganko means "stubborn". Here, however, you can find traditional Japanese craftsmen who not only display their skills, but also offer products for sale. Such craftsmen are called shokunin in Japanese, and it's possible to walk around and visit the different kinds of shops, numbering about 12 in total.

Entry is free, but of course if you want to buy something, it will cost money. The design of the buildings is very Japanese, with white walls and noren hanging outside, but they are also relatively modern. One of the first shops that I noticed by peeking inside was a doll shop with Japanese dolls in various stages of development. The dolls are made of wood, hand carved and painted. The store next door sold Japanese fude, or writing brushes, that are also handmade. On the wall, an extra large fude brush was hanging on display. You can also buy washi, Japanese paper, in different colors. Another store had pottery dishware, sake cups, and bottles on display. Looking at the prices, a single chawan or teacup (for drinking green tea) was priced at over 100,000 yen!

At the rear of the complex is a 墨の資料館, or a museum for the study of the varied uses of Indian ink in Japanese art. Many Buddhist scriptures have been written using this kind of ink. Though invented in China and used by the Chinese for centuries, the base materials of Indian ink came about through trading with India, hence the name Indian Ink. There was an interesting display using models of how the sumi was made, as well as paintings using the ink.Some of the other craftsmen found working at Ganko Ittetsu Nagaya, sometimes third or fourth-generation craftsmen, are carrying on traditions that often go back centuries, and their products have been used by some of the noble families in Japanese history. For instance, one of the artisans creates and makes the bamboo whisks used in the Japanese tea ceremony, while another makes carvings using very expensive and rare wood in Japan, hinoki and kusonoki. There are also ceramic potters working there. One shop makes lacquered bowls made from layers of paper. More information on the artist and her work is available in English at http://www.kanshitsu.com/english.shtml.

To find Ganko Ittetsu Nagaya, go out the west side of Nishinokyo station, cross the railroad tracks, and at the first Y-corner, make a right turn and walk about 50m. You will see the train line and station platform on your right. For parking, there are parking spaces for about 22 cars. The complex is closed on Mondays unless it is a public holiday, in which case the holiday is Tuesday. It is also closed from August 1st to August 31st. 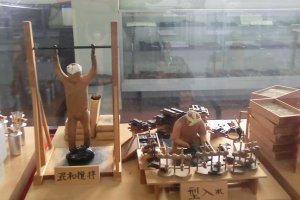 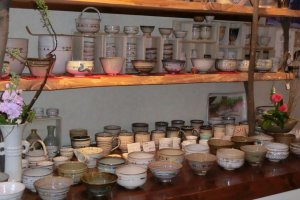 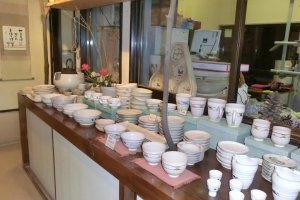