From June 1st until July 10th each year, Nara's Yatadera Temple opens its sprawling hydrangea garden for the public to enjoy. The hydrangeas here were originally planted back in 1965 in a space of 25,000 square meters, and they now number in excess of 10,000 plants covering 60 different varieties. As a result, it has become a favorite local rainy season flower spot!

Admission to the temple grounds is priced at 500 yen for adults, and 200 yen for elementary school students.

For those who plan to drive, the closest expressway exits to the temple are the Yamato Mahoroba Smart Interchange or the Horyuji Interchange on the Nishi Meihan Expressway. Paid parking is available on-site. 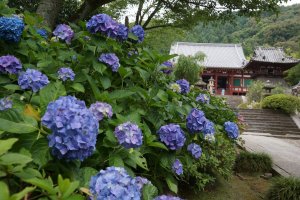