The laughing festival in Wakayama

When you go to a festival at a remote village and you are the only foreigner, it tells you something about how local and traditional it is. Going to Warai Festival has probably been one of most spectacular and rewarding experiences I’ve ever had. It is a feast full of culture, tradition, and heritage that few foreigners and Japanese know about.

Niu Shrine in the Hidaka district of Wakayama hosts every year the Warai, or laughing, festival. The festival itself is considered a Prefectural Cultural Heritage asset and can be traced back several centuries.

The festival is based on the legend of Niutsuhime-No-Kimoto goddess. According to it, the goddess overslept and arrived late to a gathering of gods. All of them made fun of her; she grieved and locked herself in the Niu shrine. The villagers, wanting to cheer her up gathered outside the shrine and began laughing all together. It is said that their laughter restored the joy of the goddess and the villagers.

Nowadays the leader of the festival, dressed up as a clown, guides the participants to the Niu shrine. The short pilgrimage is escorted with laughs, celebration and joy.

Given that the event is not only a religious ceremony, but one of celebration as well, most of the participants will be dancing, singing, and laughing while drinking sake and beer. Once they are too drunk, they are not allowed to continue carrying the heavy portable shrines. Although is very safe to watch and enjoy the performance, be aware that the heavy portable shrines go from one side of the field to the other. They can get very close to the spectators making the celebration even more fun.

The festival takes place on the second Sunday of October. It usually starts at 11:00 a.m. and ends at 5:00 pm.

The easiest way to arrive is from Wakayama City. A one hour train ride will take you to Wasa station. From there you’ll have to walk around an hour towards Niu shrine. 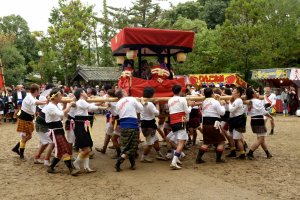 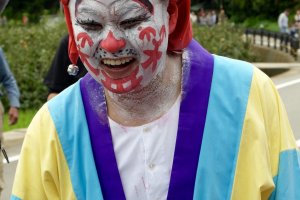 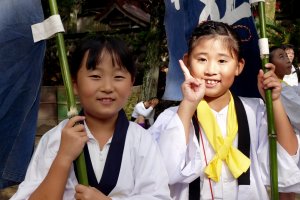 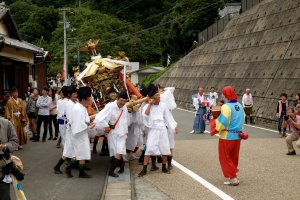 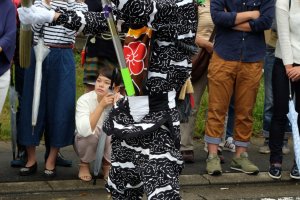 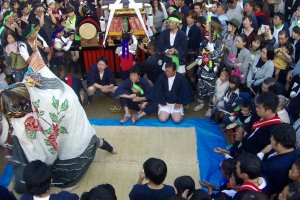 My Đặng 9 months ago
It was a very fun and memorable experience of Japanese culture!
Reply Show all 0 replies
1 comment in total