Brave the cold of February for the Saidaiji Eyo Hadaka Matsuri, also known as the Naked Man Festival, and considered Japan's third oldest festivals. Thousands of near-naked men—clad only in traditional Japanese loincloths—face the cold to compete for sacred offerings thrown to the crowds at the climax of this annual religious rite.

The festival is held on the third Saturday in February, with proceedings beginning from mid-afternoon:

The Shingi Touka climax is the main event at Hadaka Matsuri, where thousands of men compete for sacred Shingi sticks that are released into the temple crowds. Just before 10pm, all lights at the main temple hall are cut, serving to stir up the anticipation to fever-pitch levels. At 10pm, one hundred small kushigo sticks are released into the crowd, before the chief priest drops two coveted Shingi sticks into the crowds at bay.

The crowds jostle to secure them, for acquiring one of these Shingi is said to bring great prosperity and fortune for the year ahead. The smaller kushigo is said to bring a portion of luck too.

The main events are free to watch, though you can advance reserve seating (¥5,000) or standing (¥500-1,000) in specially designated areas close to the action.

The retro shopping street of Gofuku-dori is open in full swing during the festival—it’s also a warmer alternative to those who can’t or don’t want to run in the festival.

Believe it or not, it's actually possible for anyone to participate in Okayama's Naked Man Festival – hopefuls just need to apply in advance at the temple itself. It costs ¥3,000 to join, covering the loincloth, tabi socks and changing area fee.

It’s an exciting yearly event and one of Japan’s bizarre festivals; why not check it out or run with the crowd?

One of the most fascinating things to see and do in a foreign country is to take part in a local festival. In Japan, there’s no better place to join in on the fun than at Okayama prefecture’s Hadaka Matsuri. If the name doesn’t ring a bell, then perhaps it’s English name might...Naked Man Festival! This literal translation hits the nail on the head. And each year, thousands of nearly–naked, loincloth wrapped men participate in one of Japan’s most talked about festivals. On two occasions, I made my voyage into the rice fields of Okayama to Saidaiji Kannon-in Temple. Here, in your average everyday small town, you’ll find nearly forty thousand guests on what feels like the coldest night of the year, the third Saturday of February.

The Hadaka Matsuri (裸祭り) is said to “represent the struggle in old times between the assemblage of lower-ranking shinto priests” and “to set up an unlucky poor man as noble, who was unwilling to take the role.” How this applies today? Well let’s just say enthusiasm for the event isn’t lost on worrying over it. Among the twenty–thousand male participants, I was one of only few foreigners. Upon breeching the makeshift locker rooms to change, it was like we’d infiltrated an inner circle of old Japan, but never was there any animosity towards us. We were welcomed and almost celebrated by the jovial natives. Not taking away from the atmosphere was the endless pouring of sake and beer. (Though I’ve heard rumors of the event going dry! If that’s the case, some discretion may be required.)

3,000 yen gets you a kit, complete with loincloth, little tabby socks and a professional wrapping by the only guy in the room not grinning ear–to–ear. I took special note of these pros, who are the ones responsible for yanking that loincloth deeper and tighter than any cloth should dare. I’ll bet this tradition was passed down from father to son. It’s very serious business! And after you’re wrapped and by now, a bit drunk, you’re thrust out onto the streets.

The first thing you’ll note is the intense noise of it all. Men are locked arm–to–arm in rows at least five across, taking up the entire width of the street. All are headed for the same temple gates. It was 0ºC on that night, about 33ºF. I didn’t even notice the cold, as the cheers and chants had a way of carrying my spirit far beyond my body! There were thousands of fans lining the route. Our group locked arms, began chanting “Washoii”, high–fiving onlookers, posing for pictures, really getting into it.

Once inside the temple grounds, we were at the back of the pack. My English mate Jason and I were quick to manoeuvre our way into the middle of the mess. And what a mess it was. The idea of the festival being to grab hold a set of bamboo sticks, tossed from a second level of the actual temple. See that little white packet in the photo over there? That’s a bundle of about fifteen sets of bamboo sticks. Some bring money prizes, others good luck.

When in the middle of this epic commotion, I can only imagine it’s comparable to being buried alive. You can’t move, no matter what you do. You’re at the mercy of the crowd. Fortunately, I was told beforehand to “keep your arms high, if not, they’ll be pinned at your sides.”

With each breath, you feel the strain of your muscles, ribs and lungs. And with each breath, you feel your body’s expansion take over the space of your neighbors. Those ice–cold temperatures are long gone, and now your entire body is dripping with sweat, your eyes weigh heavy, utter exhaustion ensues. But what can you do? There’s no backing out of this mess now.

I closed my eyes at times, conjuring images of Dante’s Inferno, trying to decide which circle of Hell we’d landed in. It’s all rather gruesome from the inside, really. Shouts echo through the temple, a noise I’ve never heard replicated. After the sticks are thrown, it’s a twenty–thousand strong grudge match, every man for himself. Jason ended up with a rib broken, ambulance sirens rang loudly through the town’s narrow streets, and the smell of sweat, alcohol and BBQ hung low over us all. But not once was I not thankful to be there, previewed to something most in this world will never see, let alone do.

In 2010, we didn’t come up with any of those lucky sticks. But in 2011, I made my second appearance at the Hadaka Matsuri, and then, I was able to bring one of those good luck sticks back out of Hell and past the temple gates, the official Finish Line. So yes, once isn’t enough, you’ll be hooked It was 100% worth it. Best of all, I’ve had one year of good luck, thanks to those bamboo sticks.

Sadly, 2012 was out of the question due to being in the US. But I’ve already reached my goal. The feeling of having all those eyes on you, seeing the thousands of camera flashes, high-fives and support…it’s hard to duplicate. I imagine it’s what being a professional athlete is like. But don’t take my word for it, make your way to Okayama prefecture for one of Japan’s greatest festivals of the year.

Access the festivities from JR Okayama Station’s Ako Line; disembark at Saidaiji Station. From there, Saidaiji Kannon-in Temple is an easy 10-minute walk to the south of the station. 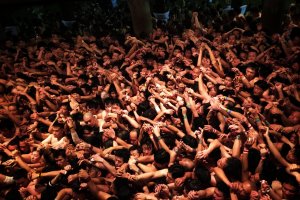 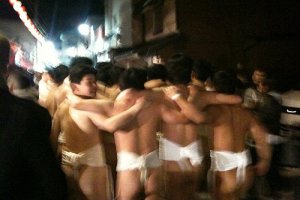 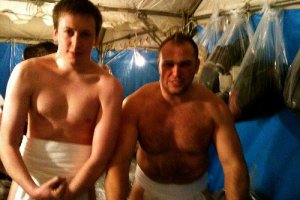