Many Japan travelers try to plan trips to align with cherry blossom season, and for those headed to Tokyo that timeframe is typically from late March to early April. If you're visiting before that though, all is not lost – head south to Okinawa and you can appreciate beautiful blossoms as early as January!

The Motobu Yaedake Cherry Blossom Festival has been running for almost half a century now, and takes place from the latter part of January until early February at Yaedake Sakuranomori Park. The event includes music, comedy, and dance performances along with the gorgeous blooms to enjoy, and more details about the additional activities at the festival can be found on the official website.

Yaedake Sakuranomori Park is located in Motobu, around 25 minutes driving time from the central Nago area. 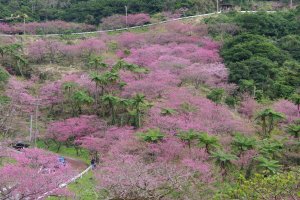