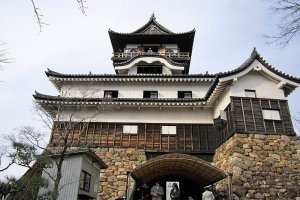 Inuyama Castle is the oldest of twelve originally preserved castles in Japan (ie castles that have survived intact natural disasters and wars since the end of the feudal era in 1867). It is also the smallest of the five castles whose main towers are designated as a national treasure. The other four castles are in Himeji, Matsumoto, Hikone and Matsue.

It was built in 1537 and stands on top of a small hill next to the Kiso River. The inside is very well preserved and gives an insight into life back then. Via the steep stairs, visitors can climb four floors to get an impressive panoramic view from above. You can also discover a lookout point that was used to spot enemies as soon as they approached.

The castle can be reached from Inuyamayuen or Inuyama station. Inuyamaen station is closer to the castle but you also can get off at Inuyama station and walk through a long street lined with shops, souvenir shops, restaurants, mochi and green tea shops, one of the snacks famous here in Inuyama.

A small, beautiful and famous castle in Inuyama

Meiji-mura (Meiji Village) in Inuyama, Aichi Prefecture, is an open-air museum and theme park. History and architecture lovers will be pleased by the..

Tagata Shrine, located in Komaki City, Aichi Prefecture, is famous for its fertility festival every March 15. Each year, a newly carved wooden phallus..

Held on the first weekend of April every year, the Inuyama Spring Festival is similar to the famous Takayama Festival later in the..