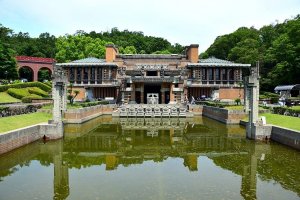 Visit a Japan of the past, when Japanese fashion and culture was beginning to mingle with its international counterparts. In Meiji-mura, you can see how this combination of Euro-Japanese architecture and fashion brought a new impression and feeling to the Japan of old.

You’ll even be able to see Frank Lloyd Wright’s landmark Imperial Hotel; originally constructed in Tokyo from 1923 to 1967, the hotel was reconstructed in Meiji-mura and makes for the impressive centerpiece of the grounds. Scattered around the one-million-square-meter property are a total of sixty-seven Meiji-era reconstructed original buildings—eleven of them are even recognized national treasures.

While you’re at Meiji-mura, you can also rent a kimono and experience the Meiji period as though you lived it. Ride streetcars, send original postcards from the historical post office, and experience Kabuki theater shows.

At Inuyama Station, use the east exit and ride the bus headed for Meiji-mura (明治村行き).

Step back in time at Meiji Mura

Over 60 buildings from the Meiji Restoration have been collected from around Japan and are now displayed in a beautifully secluded..

Tagata Shrine, located in Komaki City, Aichi Prefecture, is famous for its fertility festival every March 15. Each year, a newly carved wooden phallus..

Inuyama Castle is the oldest of twelve originally preserved castles in Japan (ie castles that have survived intact natural disasters and wars since the..

Aichi's Oagata Shrine is home to a plum grove with over 300 weeping trees in shades of red, pink, and white. Each year a plum..