Step back in time at Meiji Mura

In 1600, following the Great Battle of Sekigahara the Tokugawa Clan took full control of Japan. From then, Japan commenced a period of isolation. Foreigners were banned from entering the country, and the natives were forbidden to leave on penalty of death. After 250 years of isolation, Japan, finding it had been overtaken by the western world, threw off it’s shogun and feudal system, the Emperor was returned to power and a new era, the Meji Period began. It was 1868, the middle of Queen Victoria’s reign, Lincoln had been assassinated three years prior and Andrew Johnson was the US President. In an effort to modernize, Japan discarded many traditions in favor of western technology.

Builders and architects too turned to western know-how, adopting western styles, techniques and materials including brick and stone.  It was an exciting time for Japan, and changed the face of the nation. Unfortunately many of these wonderfully artistic and historically valuable Euro-Asian influenced Meiji era structures were lost, destroyed either by earthquake or through war, while others were simply scrapped in the post war rebuilding efforts.

The Meiji Museum was opened in 1965 in an effort to preserve and maintain Japanese architecture of the Meiji Period. Many buildings destined for destruction were sought out, painstakingly dismantled and carefully reconstructed in the five areas on the sprawling hillside facing Lake Iruka. Over 67 Meiji buildings have been purchased, saved and restored on the 1,000,000 square meter site, create a pleasant, garden filled time-slip village environment.

The Meiji Mura’s buildings have come from all over Japan, with a few even having been found in Hawaii, Brazil, even Seattle. Ten of the structures carry “Important Cultural Property” titles.

Inside the homes and schools, offices and public workstations are items of reference and furniture, the fusion of east and west that defines the period to fully authenticate the experience. Staff in period costume add to the atmosphere and are a fine source of information. Chat to the friendly old policeman when you see him, he speaks English with a passion and is a real character. Get him talking and you may find yourself with a private guide taking you around the village on his rounds!

There’s also the chance to try on some Meiji/Victorian period fashions yourself to really live the feel of the park. It makes for some great photo opportunities too!

Refreshments and restaurants offering traditional and Meiji period meals and treats can be found across the extensive park. English explanations are readily available too.

Some of the highlights include the St Francis Xavier Cathedral with it’s stunning stained glass windows, the Cabinet Library, a genuine renaissance style brick and stone building from 1911 that once stood in the Imperial Palace grounds. Likewise, you can marvel at the Frank Lloyd-Wright designed Imperial Hotel Main Entrance Hall and Lobby, featuring geometric patterns in carved volcanic rock. The old Uji-Yamada Post Office is a one storey wooden building with a copper roof that once serviced Ise’s Toyokawa Cho in Mie Prefecture and offers a real mail service too. (Ideal for posting those post cards home, and with an original Meiji era postmark!) Two railroads travel around and through the village, with original steam locomotives taking visitors on short enjoyable trips. For a little extra, a village bus, and the old Kyoto Street cars help you get around the fascinating park.

Meiji Mura offers a chance to look back on a time when Japan was looking to the future.

Find out more about Meiji Village. 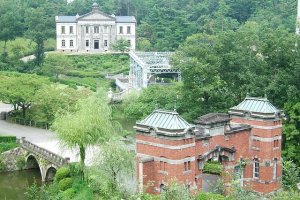 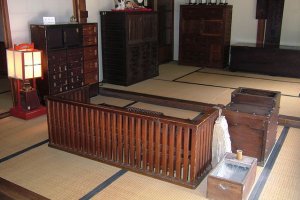 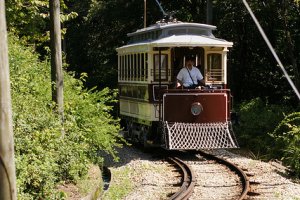 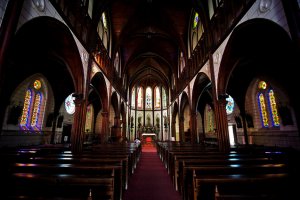 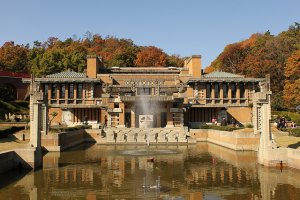 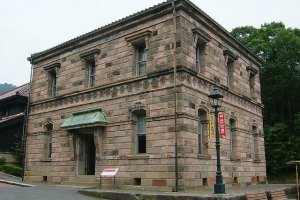