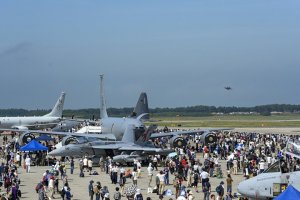 Misawa Air Base, located in Misawa, Aomori Prefecture, is used by the Japan Air Self-Defense Force, the United States Air Force, and the United States Navy. Hosting both Japanese and American troops, Misawa Air Base was used as a military base as early as 1870. The Imperial Army transformed Misawa into an airbase in 1938 and it saw heavy military use through 1941 to 1944 when it was used for research and development, as well as having facilities for Kamikaze Special Attack forces.

After the US forces took over the base in 1945, the location was used in various reconnaissance missions during the Vietnam and Cold wars. It was not until 1954 that the first Japanese Air Self-Defense Forces units were activated at the base alongside US troops. Today, Misawa is the only combined and joint service installation in the western Pacific. There are daily flights over the base to maintain readiness.

View fighter jets in elegant aerial displays from the American Air Force base in Northern Japan.

The Misawa Aviation and Science Museum is an interactive, family-friendly destination located next to the Misawa military base in..

Questions about Misawa Air Base?

Near Misawa Air Base

Each of the four summer grand festivals of Tohoku region feature different traditions and is decorated in unique way. If to mo..