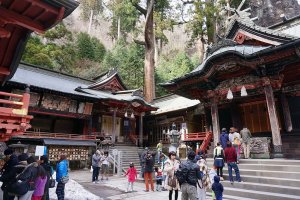 This beautiful Shinto shrine in Takasaki, Gunma Prefecture, was founded in 586 during the first year of Emperor Yomei's reign. The Haruna Shrine is located in the green cedar forests of Mount Haruna, about 860 meters above sea level and occupies 15 hectares.

The shrine is dedicated to the gods of water, fire and agriculture. The gods also grant their blessings for a good marriage and a successful business life.

Haruna Shrine dates back to 586 AD, and the oldest cedar here is thought to be 1200 years old. The shrine is considered a power..

Haruna Shrine in Gunma: An ancient power spot brimming with reverence and spirituality.

The wood carvings decorating Haruna shrine in Gunma include many dragons.

Located on top of Mt Haruna, the lake is picturesque all year round. However, the annual illumination event at Lake Haruna attracts..

Situated 20 minutes from Shibukawa, Haruna mountain is one of the famous mountains in Gunma.

For four days this December, the digital art collective Naked is hosting an event at Gunma's Ikaho Onsen that brings light and..