About half-way down along the south-western face of Mount Haruna stands an ancient shrine whose history extends back to 586, the first year of the reign of Emperor Yōmei. In addition to the spiritual ambience, here you will find a number of national natural monuments and important cultural assets designated by both the national and prefectural governments.

Haruna Shrine (榛名神社) begins with a steep uphill approach where the main entrance archway (鳥居) and great tower gate (楼門) is slowly revealed over the horizon by each closer step. The main tower gate has an East / West orientation, so at any time of day it looks radiant with the sun either streaming through from behind or reflecting brightly off its face, making for a wonderful introduction.

After entering under the tower gate, there is approximately another 700 meters of delicate wandering to be done across uneven stone pathways until you reach the inner part of the shrine.

Along the way, the path is fenced on either side by a low stone colonnade where each column has engraved the names of the families that have made donations to the shrine over the years reflecting the generations-old tradition and history of the shrine. Above you, the conifers rise to meet the sky with their leaves forming a light canopy to let a gentle amount of sunlight through and create a stillness in the air so that an atmosphere of reverence permeates. While your eyes adjust to the inconsistent light and stillness, a quietly rushing stream, energised by the contributions of Misuzu Falls (瓶子の滝), in the shallow gorge below ensures that your ears also have a constant companion.

With only one way in and one way out, it really feels like you’re crossing the threshold from the present into the distant past, but as you leave you can take a sense of renewal and something of the reverence that has been drawing people to this “power spot” for over 1,300 years.

On your journey you are met with large sculptures of the Seven Gods of Good Fortune (七福神) and monuments erected to the many anniversaries of the shrine showcased by some of the oldest trees you’ll find with one even noted as being over 1,200 years old (榛名神社の矢立杉).

Off the main path two consecutively old red archways appear, with each just out of sight of each other, to beckon you onward. The path to the first archway is sparesly paved with unevenly placed stones, the path to the second archway is trodden earth and the path beyond that is simply a rut in the ground covered by fallen leaf matter that leads you on a winding journey around and out of sight of the main path for approximately twenty minutes up to the crest of a small hill where you are greeted by the third and final archway, fresh air, absolute silence, burning quadriceps and a sense of accomplishment.

Back down on the main path, you are guided along and under hard rock walls, which have been reinforced with steel columns and a roof in some sections to protect you from any falling debris, up worn stone steps, across reconstructed bridges and past wonderful pagodas and smaller shrines until you reach the water ablution pavilion (手水舎) where you can wash your hands and mouth to purify yourself.

Before you head up the final set of stairs to the inner part of the shrine, there is a small shop where you can purchase small and large mementos of your visit.

The final gate to pass through is the two dragons gate (相竜門) upon which a coiled dragon has been carved in each wooden door. The fierceness of the dragons match the hard stone surroundings perfectly.

The sight beyond the last gate is very special as the ancient age of the shrine is immediately apparent. In fact, you might start wonder which of the shrine and the mountain was there first. In a strange reversal, the stone of the mountain appears to climb up and around the shrine halls, as creeping ivy might do to an old house. Misugata rock (御姿岩), which has stoically resisted the elements for over a thousand years, ominously sits above the main hall in such a precarious position that you expect it to come tumbling down the mountainside with the right gust of wind.

After paying your respects, it’s time to retrace your steps back through the shrine and past the cultural and religious icons. With only one way in and one way out, it really feels like you’re crossing the threshold from the present into the distant past, but as you leave you can take a sense of renewal and something of the reverence that has been drawing people to this “power spot” for over 1,300 years.

Find out more about Haruna Shrine. 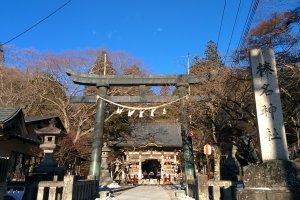 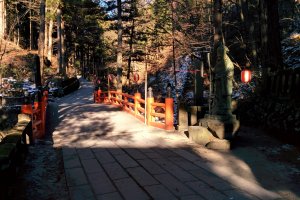 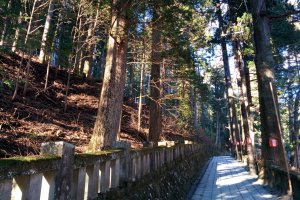 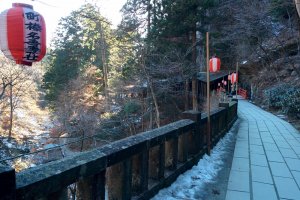 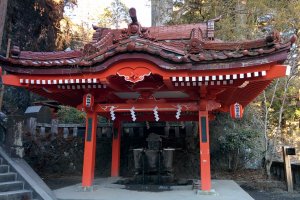 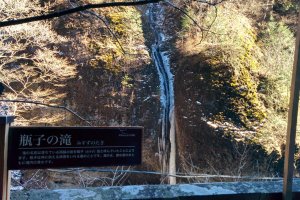 Iain Stanley 6 years ago
Shrines never get old, no matter how big or small!!
Reply Show all 0 replies
1 comment in total