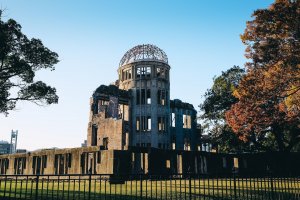 The Atomic Bomb Dome, or Gembaku Dome, was once the Hiroshima Prefectural Industrial Promotion Hall. On August 6th, 1945, the world’s first atomic bomb exploded in the air directly over the building.

A programme of preservation works continues from Sept 2020 until Mar 2021, though it is not expected to result in major scaffolding or disrupted views / Source

The Hiroshima Prefectural Industrial Promotional Hall was initially built in 1915. Designed by Czech architect Jan Letzel, the building featured European construction styles and was considered both a picturesque and important site in Hiroshima city. When the atomic bomb exploded directly overhead at 8:15am on August 6th, the resulting nuclear blast killed everyone within the building itself and in the immediate vicinity. The roof was set ablaze and the walls were destroyed but the metal frame of the building was mostly left intact.

In the post-war years, the hall became known colloquially as the Atomic Dome. Several renovations have been carried out on the remains over the decades, mostly to counteract severe weathering. In 1996, the dome was registered as a UNESCO World Heritage Site.

Today, the A-Bomb Dome sits at the northern end of the Hiroshima Peace Memorial Park, a short walk from the Gembaku Dome tram stop (Gembaku-mae) and the city’s central shopping arcades. In the evening, muted lighting illuminates the dome. It presents a striking scene of sadness and loss but also perseverance and hope.

Along with the Peace Memorial Museum itself, Hiroshima's Atomic Bomb Dome has become a symbol of peace, visited by pilgrims..

An Evening in Hiroshima

The iconic remains of the Hiroshima Prefectural Industrial Promotion Hall, have become a symbol of both the horror of nuclear war..

"Carried to Hiroshima from Tinian Island by the Enola Gay, a U.S. Army B-29 bomber, the first atomic bomb used in the history of humankind, exploded approximately..