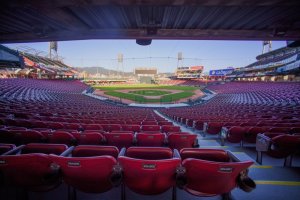 MAZDA Zoom-Zoom Stadium Hiroshima, also known as Hiroshima Municipal Stadium, is a ballpark in Minami-ku. It is primarily used for baseball and is home to the Hiroshima Toyo Carp of the Japanese Professional Baseball League. The naming rights of the The stadiums are owned by the automobile manufacturer Mazda, which, in addition to the Matsuda family, is also a major shareholder in Hiroshima Toyo Carp.

The stadium has a capacity of 32,000 and was opened on April 10, 2009. The stadium was designed so that it is easily accessible for the disabled, the elderly or those accompanying children. There are also shops selling merchandise and food stalls selling meals and snacks and drinks are served.

Mazda "Zoom Zoom" Stadium is the home of the Hiroshima Toyo Carp baseball team of NPB's Central League. Visit in the afternoon..

Located near the Shinkansen exit, Chelsea cafe is a nice cafe-bar serving cheap lunch sets (under ¥700), is a good choice at n..

Kaiseki style set Japanese courses and dishes highlighting the beauty and tastes of tofu, yuba and many seasonal delights.

Hiroshima Tōshō-gū (広島東照宮) is a Shinto shrine in Hiroshima which was established in 1648. As with all Tosho-gu shrines in Japan, it enshrines t..

The Peace Pagoda, or busshari-tō as it it called in Japanese, was built at the instigation of a Bhuddhist monk named Nichidatsu Fujii. Fuji was the ..

Shukkei-en is a historic Japanese garden in the city of Hiroshima, Japan. The Hiroshima Prefectural Art Museum is located adjacent to the garden. [Wikipedia]..