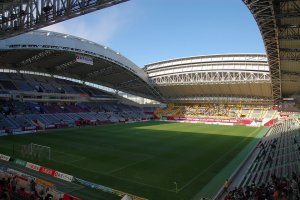 The Kobe Misaki Stadium made Japanese history when it was completed in 2001, as it was the first stadium in the country to install special lighting at night and host games after dark. It can seat over 30,000 spectators.

The retractable roof of the stadium allows fans to watch the games even in bad weather without getting wet. The stadium is conveniently located near the center of Kobe and is the home of J.League football club Vissel Kobe and the top league rugby team Kobelco Steelers.

In addition, the Kobe Misaki Stadium was one of the twelve venues for the 2019 Rugby World Cup, which was held in Japan.

Nishimura Coffee was the first coffee house in Japan to serve black coffee. It has been in operation since 1948 and strives to serve..

When it comes to classifying sake, it's all about the rice polishing ratio!

The 108-meter-high Kobe Port Tower is one of the most famous landmarks of the port city of Kobe. The observation tower was completed in 1963. A key feature..

Nankin-machi is a neighborhood in Kobe, south of Motomachi Station and adjacent to Daimaru Department Store. The area is known as Kobe's Chinatown..