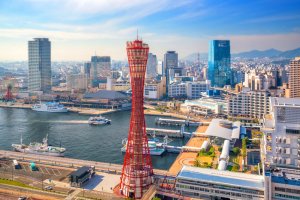 The 108-meter-high Kobe Port Tower is one of the most famous landmarks of the port city of Kobe. The observation tower was completed in 1963. A key feature is its tubular construction, and it was the first tower to have this form of construction. The structure resembles a Tsuzumi, an elongated traditional Japanese drum and the first tower in Japan to be illuminated at night.

He has received numerous awards in both the architecture and lighting categories.

From the observation deck, visitors have a spectacular panoramic view of the harbor, the city and the Rokko Mountains on the horizon.

Interactive panels and audio guides are offered in all four directions and the design of the ceiling of the observation deck offers a romantic representation of the starry sky of the city of Kobe.

A rotating café with a view of the Mount Maya range and the port area of the city of Kobe make for a beautiful evening.

This photo story details multiple views I have taken over a two year period. Hope they inspire you to visit someday!

The Kobe Port Tower is a symbolic landmark of Kobe, and a great place to catch the amazing scenery of the region.

Nishimura Coffee was the first coffee house in Japan to serve black coffee. It has been in operation since 1948 and strives to serve..

Conana is a little restaurant in San Plaza, that serves pasta with a Japanese twist. It's the place to go to try something a..

Nankin-machi is a neighborhood in Kobe, south of Motomachi Station and adjacent to Daimaru Department Store. The area is known as Kobe's Chinatown..

The Kobe Misaki Stadium made Japanese history when it was completed in 2001, as it was the first stadium in the country to install special lighting at..

The Hyōgo Prefectural Museum of Art is a purpose built municipal art gallery in Nada-ku, Kobe, Hyōgo Prefecture, Japan. It was opened in 2002. [Wiki..