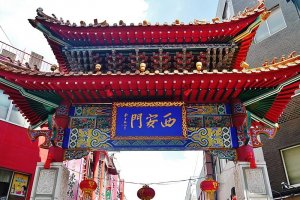 Nankin-machi is a neighborhood in Kobe, south of Motomachi Station and adjacent to Daimaru Department Store. The area is known as Kobe's Chinatown and has more than a hundred Chinese restaurants, shops and a Chinese temple dedicated to Guan Yu.

Nankinmachi is a center of the Chinese community in the Kansai region. The area was opened up by Chinese traders who settled near the port of Kobe after the port was opened to foreign trade in 1868. As Chinatown developed, it was named after Nanjing, the former Chinese capital.

The area is a popular shopping and dining district. It offers popular items such as steamed buns (manju), ramen, tapioca drinks, and various other Chinese dishes, many of which have been adapted to Japan to some extent.

Sodium lamps on silent streets of Motomachi Chinatown in Kobe create an intriguing oriental feel in the semi darkness.

Kobe Chinatown or Nankinmachi is an area dedicated to Chinese culture in the center of Kobe. It is a hub of Chinese shops, res..

Nankinmachi is Kobe's Chinatown district. To experience Chinese culture or to grab a bite to eat, it's a great place to..

Traditional folk dancing is one of the main events at the Chinese New Year celebrations in Kobe's Chinatown, Nankinmachi.

Walk Through Chinatown in Kobe

Kobe's Chinatown is one of Japan's most popular tourist attractions. You can feast on spring rolls, steamed dumplings and..

Nankin-machi is located in Motomachi, a China Town in central Kobe. There are three archways, Changan Gate in the east, Xian Gate..

In central Kobe in Japan's Hyogo prefecture, Nankinmachi is the city's Chinatown, is a fun, lively place with a wide range..

The Nankinmachi Lantern Festival is an annual event that takes place at Kobe's Nankinmachi Square, which is one of the city's..

Conana is a little restaurant in San Plaza, that serves pasta with a Japanese twist. It's the place to go to try something a..

Treat yourself to an all-you-can-drink wine lunch for less than 2000 yen! Kobe's Nomadika Cafe & Bistro is where you want to..

The 108-meter-high Kobe Port Tower is one of the most famous landmarks of the port city of Kobe. The observation tower was completed in 1963. A key feature..

The Hyōgo Prefectural Museum of Art is a purpose built municipal art gallery in Nada-ku, Kobe, Hyōgo Prefecture, Japan. It was opened in 2002. [Wiki..