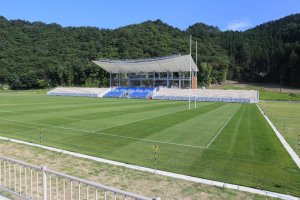 The Kamaishi Recovery Memorial Stadium, built specifically for the 2019 Rugby World Cup, was completed in 2018. The stadium was built as part of post-disaster reconstruction and in honor of those who suffered in Kamaishi, Iwate, after the Tohoku earthquake in 2011. It was built on the site of former elementary and middle schools whose students fled to higher areas during the tsunami, and is the only newly built facility among the twelve rugby world championship venues.

With a permanent capacity of six thousand and an additional ten thousand seats added during the Rugby World Cup, this stadium represents Kamaishi's close relationship with rugby as part of its history and future, and the hope for continued recovery in the area.

From Sendai Station take the Tohoku Shinkansen to Shin Hanamaki Station, transfer to the Kamaishi Line to Kamaishi Station, and take the Sanriku Line to Unosumai Station. From there it is a 5-minute walk to Kamaishi Recovery Memorial Stadium.

Blue Compass will host a two-day trip to Kamaishi, Iwate, in April. The event centers around a rugby match between the Kamaishi..

Unosumai is a wonderful part of Kamaishi, named after cormorants that nest nearby. It was also designated as a safe area of refuge..