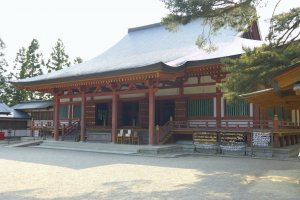 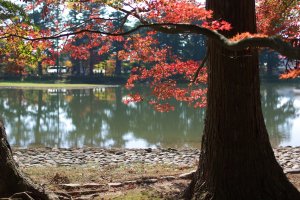 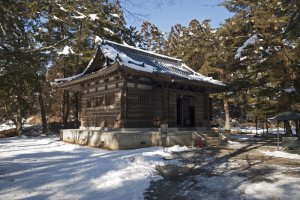 The Motsuji Temple was once a large and important temple of the Tendai sect and consisted of numerous buildings. Today Motsuji is best known for his garden, which tried to recreate the Buddhist concept of the pure land or "Buddhist paradise".

The history of the temple tells that in 850 the priest Ennin, the third abbot of the Tendai sect, was traveling in northern Japan when he got lost in a thick fog in this area. When Ennin looked at his feet, he noticed the hair of a white stag. Ennin approached the stag, but it disappeared in the fog. A silver-haired old man appeared in his place and told the abbot that this was a sacred place and that he should build a temple there. Ennin sensed that this old man was an incarnation of Buddha Yakushi and followed his advice.

Motsuji has some buildings that are extremely interesting for visitors. This includes the main hall of the temple and a treasure house where Motsuji's historical and cultural artifacts are exhibited.

The garden is best enjoyed through a leisurely walk along the stone path that crests the edge of the pond. 500 meters in length and surrounded by seasonal flowers, a stroll of the entire park will take you less than an hour.

The principal hall that acts as the center point of current day Motsuji Temple. Within the hall stands a statue of Yakushi, the healing Buddha that acts as a focal point of worship. Yakushi is said to respond to prays for good health or those wishing for a swift recovery from disease or illness.

Omikuji (paper fortune-telling) can also be found at the front of the Hondo. If you pay attention to locals or those well informed attending this temple, you will find that the traditional "2 hand claps" before praying isn't performed here. Instead, you will find those offering their prayers silently, with their hands pressed together in worship.

A building that has on display some of Motsuji's historical and cultural artefacts. Twelfth-century Motsuji artefacts used in the "Ennen No Mai" longevity ritual such as costumes, written works, historic records and even Buddhist statues can all be found here.

A building in honour of the third head of the Tendai sect and the three Fujiwara lords who ruled over Hiraizumi. This hall commemorates Ennin (Jikaku Daishi), third head abbot of the Tendai sect, said to have been the one who founded Motsuji. Inside you can find a statue of the Dainichi Buddha and a painting of the three Hiraizumi Fujiwara lords, Kiyohira, Motohira, and Hidehira.

Motsuji is a 3-minute ride from JR Hiraizumi Station by the Hiraizumi Loop Bus or a 7-minute walk.

Chusonji is a Buddhist temple in the city of Hiraizumi in southern Iwate Prefecture. It is the main temple of the Tendai sect in the Tohoku region in..

The Genbikei Gorge is a 2 km stretch of the Iwai River, known for its rugged landscape and dynamic whitewater stretches. The rocks and cliffs are a national..

This quiet corner of Iwate was once the cultural and commercial heart of nearly a third of Japan.