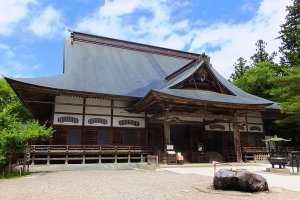 Chusonji is a Buddhist temple in the city of Hiraizumi in southern Iwate Prefecture. It is the main temple of the Tendai sect in the Tohoku region in northern Honshu. The temple is said to have been founded in 850 by Ennin, a monk associated with Enryakuji Monastery and the third abbot of the Tendai sect. Ennin is also known for the autobiographical record of his travels and studies of Buddhism, considered by some to be one of the greatest travelogues in the world.

In the dedication commitment for the Chusonji Temple it is written that all travelers, regardless of their status, will be lovingly welcomed by the Buddhas and would receive their blessings without exception.

In 1337 a fire destroyed many of the temple's halls, pagodas, and treasures. Nevertheless, more than 3,000 national treasures and important cultural assets survived, including above all the Konjikido, the small, golden Amida hall, which was the first building to be declared a Japanese national treasure.

On a wooded hill in Iwate, you can find the unfaded remnants of an ancient golden age.

Chuson-ji temple was designated as a World Heritage Site in 2011. It is located at Hiraizumi in Iwate Prefecture, Tohoku.

Hiraizumi is a beautiful, rural town in southern Iwate and makes for a spectacular introduction to both Tohoku and historical Japan...

The Motsuji Temple was once a large and important temple of the Tendai sect and consisted of numerous buildings. Today Motsuji is best known for his garden,..

Genbikei is a ravine or river gorge that has been desThe Genbikei Gorge is a 2 km stretch of the Iwai River, known for its rugged landscape and dynamic..

Tohoku contains some of Japan's most undiscovered treasures, and while the 2011 tsunami and earthquake damaged the region, it..