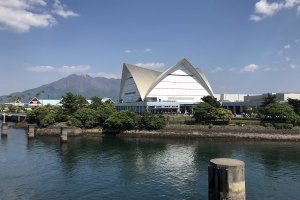 With such proximity to the sea, it comes as no surprise that Kagoshima has its own aquarium. Located near Sakurajima Ferry Terminal and the Dolphin Port complex in Kagoshima City this seven-floor aquarium has been welcoming locals and visitors alike since opening in 1997.

With a focus on local marine life, Kagoshima City Aquarium is known for its legendary Kuroshio Tank, a massive and comprehensive display of sea creatures and sea life from the Kuroshio Current which passes by Kyushu and includes specimens such as rays and whale sharks.

The aquarium’s distinctive architectural design and warm ambiance create a quirky and welcoming scene and it’s not a surprise, then, that it’s one of the city’s main tourist attractions. The space’s Dolphin Pool holds three dolphin shows each day and has become a huge hit over the years with tricks and fun aimed at families and couples who come to enjoy the spectacle.

A Trip to Kagoshima City Aquarium

Kagoshima City Aquarium is a great way to learn about the area's rich marine heritage.

Why not review more places in Kagoshima?

Stay at Dormy Inn Kagoshima and enjoy a great location close to the main station and with easy access to the ferry terminal!

In the centre of Kagoshima on Japan's westerly Kyushu island, Hotel Gasthof is full of middle-European charm and character,..

Located right behind Kagoshima Chuo Station, Kagoshima Little Asia is a convenient hostel at great rates, right in the heart of..

The Kagoshima Ramen Festival involves various ramen chefs battling it out to be awarded the title of the prefecture's best ramen...

Shotengai (traditional shopping arcades) are the veins that run through the cities of Japan. Bastions of independent businesses and arteries of the communities..

Sengan-en (仙巌園) is Kagoshima's renowned Edo-era stroll garden, situated in the northern part of the city. Once the home of the ruling Shimazu..