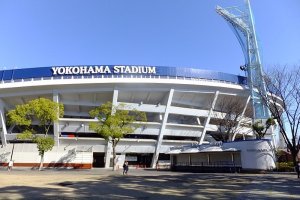 Yokohama Stadium is located in Naka-ku, Yokohama, and is a multi-purpose stadium. These are quite rare these days. Yokohama Stadium opened in 1978 and can seat over 30,000 people. Today the stadium is primarily used as a baseball stadium Home field of the Yokohama DeNA BayStars, but American football games and live events also take place there.

The stadium hosted an Australian rules football game and attracted the second largest crowd for such an event outside of Australia.

The DeNA Yokohama Baystars' management loves putting on a show at Yokohama Stadium. From DJs to special promotions, attending..

Yokohama Stadium Before a Game

On game day, passion and cheerful energy are in full swing in and around Yokohama Stadium!

At the 2020 Olympic Games baseball and softball matches will be special additional events. Baseball is regarded as a national sport..

If you are a baseball lover and have been captivated over the years by the magical performances of Nomo, Matsui, and Ichiro, then..

Bay Beer House is back for 2017, opening at the Hamasta Bay beer garden area for a limited time.

Conveniently located hotel near of Sakuragichi JR Station with good access to Yokohama's many waterfront shopping, dining and..

Yokohama Chinatown, also known as Yokohama Chukagai, is Japan’s largest Chinatown. An enclave of Chinese shops and restaurants has stood in this section..

Kanteibyo Temple (関帝廟) is a spiritual landmark in Yokohama’s Chinatown. It shines like a beacon of faith with its vibrant red exterior and intric..