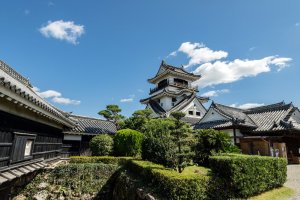 Kochi Castle in Kochi Prefecture, Japan, was built following the Battle of Sekigahara in 1600. Construction of the castle took place from 1601 to 1611 and remained intact until a fire burned down much of the original fortress in 1727. The castle went through two major reconstruction periods; the first from 1729 to 1753 and the second from 1948 to 1959.

While no battles of importance took place at Kochi Castle, it is noteworthy for its original structures. Kochi Castle is the only castle in Japan to retain the original tenshu and palace and have all the original buildings of the honmaru. Today it remains an Important Cultural Asset.

In pop culture, the castle has been featured in the animated film Ocean Waves by Studio Ghibli. It was also portrayed in the film The Harimaya Bridge where several scenes took place in the courtyard.

When visiting the castle today, guests are asked to remove their footwear and don slippers. The old tatami rooms are not accessible due to their age and wear but they are visible. Visitors can also view many Tosa artifacts and even climb stairs to the upper rooms of the tower where there is a wonderful view of the castle surroundings. Handicap access is severely limited due to the number of stairs and the lack of an elevator.

Kochi Castle is in downtown Kochi on Otakasa Hill, and offers a great place for a lookout over the city. You can also enjoy a picnic..

A must-see when visiting Kochi City, the Sunday Market features hundreds of stalls stretching all the way from the gate of Kochi..

Why not review more places in Kochi?

Stay at this upscale hotel in close proximity to Kochi Castle, where you can enjoy a hot spring bath and learn a few things about..

Watching katsuo no tayaki being cooked is part of the fun, as thick fillets of bonito (also known as skipjack tuna) are thrust into..

Stop by and at least enjoy the funkiest facade in Kochi, but if you're in need of a quiet rest and a decent cup of coffee, Mephistopheles..

Katsurahama Beach in Kochi Prefecture is a good site for a half-day trip. If you’re looking for a day of waves, sun, and sand—unfortunately, Katsurahama..

Cafe Stanley is in downtown Kochi City, and offers large lunch portions at a very reasonable price. Weary tourists will love the..