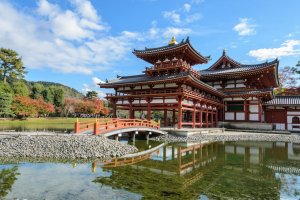 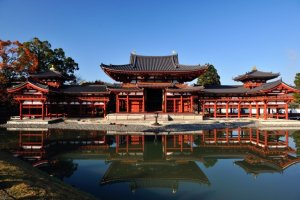 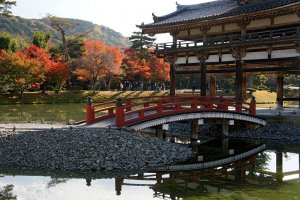 The Byodoin Temple in the city of Uji near Kyoto adorns the reverse of the Japanese 10 yen coin and is best known for its distinctive “phoenix hall”. The original building was built in 998 as a nobleman's villa and later by a member of the then Influential Fujiwara clans acquired and converted into a temple.

Over the centuries the temple complex has been expanded and expanded, among other things, by the phoenix hall, inside of which there is an Amida Buddha statue and which thus forms the heart of the temple complex. Even if its official name is Amida Hall because of this statue, it is mainly referred to as the Phoenix Hall because of the representations of the Chinese firebird on the roof.

The Byodo-in Temple has been a UNESCO World Heritage Site since 1994 and is a popular tourist destination because of its special architecture and the surrounding garden. Visitors can also admire the interior of the hall on a guided tour.

Since 1951, the Phoenix Hall of Byodo-in has been engraved into the minds of all Japanese people — with its place on the back of the everyday 10-yen coin. The hall itself was once meant to house the regents of the Fujiwara clan, but has since been converted into a place of worship for Buddhists. Within it can be found the Amitabha Tathagata statue, a designated National Treasure of Kyoto. Look out for the two golden phoenixes atop the roof of the aptly named Phoenix Hall.

On the sprawling temple grounds is a traditional Japanese garden. Designed based on the Jodo Garden style, it is a prime example of Heian period gardens. The landscape of the garden was designed to recreate the ‘Buddhist Pure Land’, complemented by the clear Aiji-ike Pond and majestic backdrop of the surrounding mountains. Byodo-in’s garden is also the oldest remaining Jodo-style garden, and was thus enshrined as a National Historic and Scenic Beauty Site.

The Phoenix Hall of Byodoin in Uji

The Phoenix Hall at Byodoin Temple in Uji is the very image of Buddhist heaven.

The Byōdō-in Temple as represented on the Japanese 10 yen coin can still be seen and visited today.

Enjoy the beauty of renewed Byodo-in Phoenix Hall in Uji City, Kyoto, after a two-year renovation!

Beyond Phoenix Hall at Byodo-in

There are other temples inside the premises of Byodo-in Temple Complex in Uji City in Kyoto. Don't forget to visit them when..

The Past and Present of Byodoin

Views of Byodo-in at Uji, taken from the path outside the temple grounds, with tiled roof tops rising above green trees.

Searching for Ryoma at Teradaya Inn

This is the place where Ryoma Sakamoto was attacked by authorities. His wife Oryo saved him by running naked from the bath to inform..

Uji is thought to be the first place in Japan to have mastered tea growing. Thus, it makes sense that Uji is so well-known for matcha...

Visiting the Kansai region and wanting to try one of the signature dishes of Western Japan, “Okonomiyaki?” Or, have you alread..

Torikizoku is a popular and affordable yakitori chain store in Japan. What is yakitori? Yakitori is grilled chicken served on ..

Located in Uji, the city renowned for green tea, Ujigami shrine is Japan’s oldest existing shrine. Among the country’s thousands of shrines, Ujigami..

Ōbaku-san Manpuku-ji is a temple located in Uji, Kyoto. It is the head temple of the Japanese Ōbaku Zen sect, named after Wanfu Temple in Fujian, Ch..

Founded in 874, Daigo-ji Temple is one of Kyoto's most scenic religious sites. The hillside temple grounds make it a prime spot for cherry bloss..