The Past and Present of Byodoin

The Phoenix Hall and its brilliant history

Now and then a friend or acquaintance planning a first trip to Japan will ask me a deceptively simple question: what famous temple or shrine should I visit? My attempt to answer this query usually devolves into a stumbling, stuttering discourse cluttered with conditionals, contingencies and annotations – except when I happen to have a ten yen coin in my pocket. Then, I simply hold up the copper, and say: “You should probably see Byodo-in.”

The matchless relic of a golden age

There are several reasons why an image of this location graces the face of the venerable ten yen piece. A UNESCO World Heritage Site and Japanese National Treasure, the photogenic Pure Land temple is the home to the Houou-do, or Amida Hall, which has survived for nearly a thousand years. This matchless example of Heian period architecture, known to most of the world as the Phoenix Hall, is what lends its silhouette to the ubiquitous coin.

While older and larger Buddhist landmarks exist, none bear comparison to this brilliant pavilion. The ancient temples of Japan tend to be austere and dark, with shadowy interiors; the Phoenix Hall is decidedly festive and ornate, and has as its interior centerpiece an Amida Buddha carved by Jocho – the preeminent sculptor of Japan’s classic age. In many respects one could argue that this hall, with its dozens of flying bodhisattvas, gilded walls and ceiling, and golden centerpiece is the “Sistine Chapel” of Japanese temple art and architecture.

A Playground of the Court

But even all of this doesn’t completely account for the elevated place of Byodoin in the Japanese conscious. While very much a gem of Kyoto culture, Byoudouin is not exactly in the old capital itself – it’s thirty minutes away, in Uji. This is where Murasaki Shikibu (c. 978–1016) set the final chapters of her masterpiece, The Tale of Genji; and it is where a lovely view of the shining Uji river, and verdant mountains, enticed many wealthy courtiers to build their villas. In fact, one such minister built his second home on the site in 992; it was later purchased by the imperial regent Fujiwara Michinaga, and finally converted into Byoudouin temple by his son, Fujiwara Yorimichi, in 1052. A century and a half later, the monk Myoan Eisai (1141 – 1215) brought the seeds of both Zen Buddhism and the tea plant to Japan from China, and Uji became famous for its high-quality green tea.

But don’t believe for a second that opulence, art and religion are the only stories here. Can you imagine the Japanese loving a place just for hosting boozy, eleventh century soirees, and the works of a god-obsessed sculptor and his acolytes? Nay, Byodoin was also the site of the first battle of Uji Bridge (1180) the pride-fueled fight that started the Gempei War – the epoch-ending conflict that terminated the Heian period, and plunged Japan into more than 400 years of feudal darkness. In fact, it is here that the poet warrior Minamoto Yorimasa ended his life as his outnumbered samurai were cut down by the arrogant Heike.

Soft serve and a little imagination

I could rest my case here, and so I will. This place wins my short-list vote for must-visit attractions in Japan – forever. Even the matcha ice cream (outside the temple gates, of course) is bomb, and if you don’t like soft serve the souvenir shops have figured out many other ways to get you really wired on green tea. But do take this advice: visit on a slow day, and avoid those detestable tour buses. Get inside the compound early, as the morning sun is striking the Phoenix Hall. Try to imagine the view as Yorimasa might have seen it, before the levee was built, with the river in plain sight; and not on his last day, with the bridge and riverbanks strewn with slain warriors in colorful silk battle robes and embroidered wicker armor; rather with the waters rippling and shimmering as they passed serenely before the lush green hills.

Byoudou-in is located in Uji, approximately a fifteen minute walk from Uji Station on the JR Nara Line.

Find out more about Byodo-in Temple. 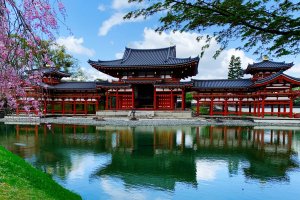 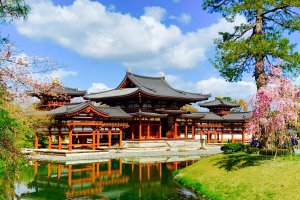 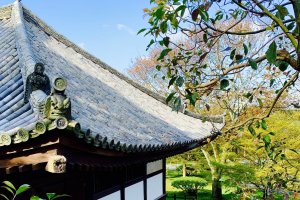 Elizabeth S 3 years ago
Lovely photos! Every time I get a fresh, shiny 10 yen coin, I remember my visit to this gorgeous temple.
Reply Show all 0 replies

Sleiman Azizi 3 years ago
This is a good read.
Reply Show all 1 replies

Kim 3 years ago
I loved reading this! I've wanted to visit this region of Japan for a while, which I chalk up to loving tea...but you've given me even more incentive to check it out. Beautiful pictures, too!
Reply Show all 1 replies

Scott Brause Author 3 years ago
Thank you. It's an inspiring place!
Reply

Bonson Lam 3 years ago
Stunning photos! Even more brilliant after its makeover. Come back to Uji in summer for Ukai fishing boats.
Reply Show all 2 replies

Scott Brause Author 3 years ago
Thanks for your positive feedback. Photos are always the toughest part, right?

Bonson Lam 3 years ago
Yes indeed, sometimes I had to revisit a place a year later, just to get the right photos.
Reply
8 comments in total