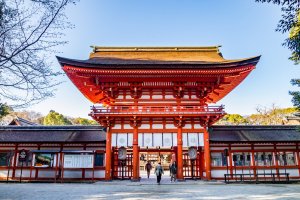 The Kamo Shrines, Shimogamo Shrine and Kamigamo Shrine are both recognized as UNESCO World Heritage Sites. They are two of the most important and oldest shrines in Kyoto. They are located in the north of the city and are intentionally placed to ward off evil and Protect the city In fact, the two Kamo shrines are even older than the city, which became the national capital in 794.

Shimogamo Shrine is located at the confluence of the Takano and Kamo Rivers and is surrounded by a forest that contains trees up to 600 years old. The Kamigamo Shrine is about three and a half kilometers upstream and is known for two sand cones on its site, which have a cleaning function for the sanctuary and have been ritually made since ancient times.

Together the shrines host one of Kyoto's three biggest festivals, the Aoi Matsuri, which takes place on May 15th.

5-minute bus ride from Denmachi-Yanagi Station to Shimogamojinja-mae stop (via city bus no. 4)

Home of the Aoi Matsuri or the Hollyhock Leaf Crest Festival, which blossomed throughout Japan when the Tale of Genji was written..

Close up on Shimogamo Shrine, Kyoto

An early morning visit in late December to one of Japan's oldest shrines, Shimogamo Jinja, was cold and beautiful. The sun had..

Shimogamo Shrine in Summer: The formal approach to the shrine cuts through Tadasu-no-mori Forest. Enjoy a pleasant walk along ..

Opened in June 2021, this is a venture between the Marriott group and Sun Frontier Hotel Management Co., Ltd.

Cooking with Taro, his wife Yoshiko and their young daughter Haruko is like experiencing a slice of Japanese family life. Learn..

The Kyoto Imperial Palace is the former ruling palace of the Emperor of Japan. Since the Meiji Restoration in 1869, the Emperors have resided at the Tokyo..

Located in the heart of the city, Kyoto Gyoen National Garden is a natural oasis perfect for escaping the busyness of urban life. This vast green space..