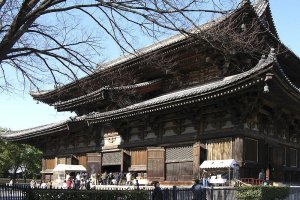 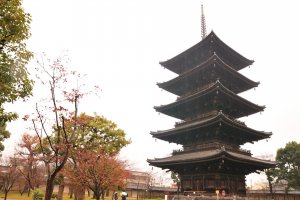 The Toji Temple is one of the original three Buddhist temples that were built in Kyoto at the beginning of the Heian period. In the year 796, the Toji Temple was built together with the Sai-ji and Shingon-in temples. Unfortunately, Toji Temple is the only one that has survived to this day.

The historic 5-story pagoda building is home to several significant artifacts and treasures, which resulted in Toji Temple being recognized as a UNESCO World Heritage Site.

About thirty years after the temple was built, Kobo Daishi, the founder of the Shingon sect of Japanese Buddhism, was appointed high priest of Toji, and the temple became one of the most important Shingon temples alongside the sect's headquarters on Mount Koya.

Kondo Hall is the main hall — Toji Temple’s largest building. Built in the 8th century, the original building burned down in 1486 and was rebuilt in 1603. Inside the main hall are three golden Buddha statues that represent the cosmology of Buddhism.

The icon of Toji Temple, the original five-storied pagoda was built in the 9th century. The pagoda that you see today was rebuilt in 1644, after a series of unfortunate lightning strikes burned down the original building. Despite its tall stature, the pagoda is held firmly using only stone foundations. Its unique building blocks have allowed it to withstand earthquakes, leaving it still standing till today.

A large sakura or cherry blossom tree stands outside the ticket office at the entrance of Toji Temple. During spring, the area around the temple and sakura tree are spectacularly lit up at night. The night illuminations under the pink cherry blossoms add to the beautiful view of the temple grounds.

Held once every month at Toji Temple, is the famous Toji Temple Market. Toji Temple is located one station away from Kyoto Station..

Kyoto is a leading tourist city.In addition to thousands of temples and shrines, many festivals or events are held throughout the..

The five-story pagoda at To-ji Temple is both beautiful, and extremely strong. Those that designed the temple figured out a way..

Toji Temple in Kyoto is a symbol, not only of Kyoto city, but also of Japan. Come take a walk through the ancient grounds and enjoy..

As in many temples, the little details you find surprise and delightful. Here I found a beautiful little sand garden, nice statues...and..

To-ji Temple, Kyoto: There is something powerful and foreboding yet beautiful in its appearance.

In Kyoto? Like hunting for antiques? Then head on over to the market held at To-ji Temple once a month.

Kyoto's Toji Temple hosts an evening illumination event that celebrates the cherry trees in bloom on the grounds. There are..

The TeamLab collective has become well-known for their inventive art installations, and an event at Kyoto's Toji Temple carries..

The streets of Toji are like the Shitamachi of Kyoto. It is only 6 minutes from the Glass Tower of Kyoto Station, but it is like..

Hotel Anteroom Kyoto is a stylish hotel with a homely and artistic space, one stop south of Kyoto.

The names given to Wagashi are invariably connected with nature and the changing seasons.

Enjoy an Italian lunch at The Kanra Kitchen Kyoto

Kyoto Aquarium is located on the edge of Umekoji Park near Kyoto Station. The aquarium features 9 zones including penguins, seals and dolphin shows.

The Kyoto Railway Museum opened to the public on April 29, 2016, and is an opportunity to experience Japan's progress in modernization through its..