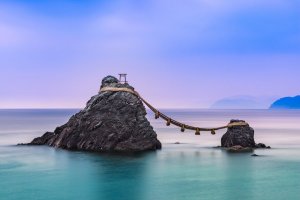 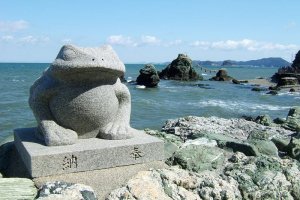 In Mie Prefecture, not far from the city of Futami, which belongs to the city of Ise, are the Meoto Iwa rocks, which are also called" The Married Rocks ".

These two sacred rocks in the sea near the coast are not far from the Futami-Okitama Shrine, the Ryuugu Shrine and also near the famous Ise Shrine itself.

The two rocks are connected with a so-called Shimenawa. This is a ritual rope made of rice straw. This fact gave them the nickname "The Married Rocks"

In the belief of the Shinto religion, these two rocks represent the union of the pair of gods Izanagi and Izanami, who, according to legend, are the two central gods "Kami" in the myth of the origin of Japan.

Found all over the area surrounding Meoto Iwa and Futami Okitama Shrine, these frog statues are believed to bring good fortune in returning lost items. The word frog in Japanese is kaeru, which shares phonetics with the verb for return, also kaeru. If you’re waiting for something or perhaps someone to return to you, patting a frog statue might do you some good.

A 15-minute walk from Futaminoura Station or a short bus ride via the local sightseeing CAN bus.

The Sacred Rocks of Meoto Iwa

South of Ise, just offshore from the village of Futamigaura, are the two symbolic and sacred rocks known as the Meoto Iwa, or "husband..

Although Ise is mainly famous for Ise Jingu, it is also a very nice coastal city with other great sights to see like the Meoto..

Why not review more places in Mie?

Looking like a shrine, temple & small castle all rolled into one, the traditional Japanese Hinjitsukan structure was operated as..

For the first time in its century-old history, the National Confectionery Expo is being held in Mie Prefecture, from Friday Ap..

Ise-Shima National Park in Mie Prefecture is well-known for its legendary Ise Lobster. But, are you brave enough to try Ise Lobster..

Visit Iruka-jima (Dolphin Island) in Mie Prefecture for an amazing time admiring the sea and these wonderful marine creatures. For the fare of riding..

Off the coast of Toba is Mikimoto Pearl Island. This Mie Prefecture attraction is the birthplace of cultured pearls and is operated by the Mikimoto Pearl..