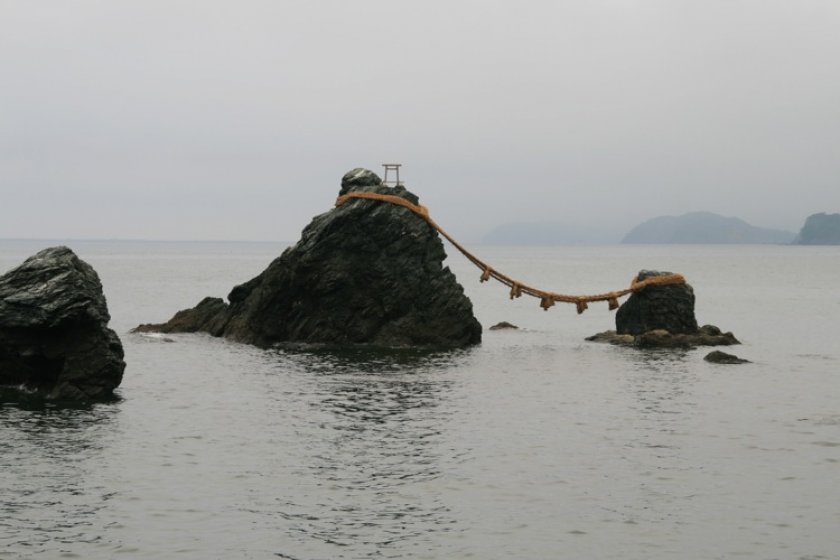 The Sacred Rocks of Meoto Iwa

The husband and wife rocks in Mie prefecture

An often seen typical view of Japan is the one where two large rocks, islands in a swirling surf, are connected by a straw rope. This is the sight you’ll see when making a trip to Mie Prefecture’s holy Ise region.

Less than 700 meters offshore from the village of Futamigaura just south of Ise are the two symbolic and sacred rocks known as the Meoto Iwa. Meoto means couple. The larger rock, named Izanagi, is the husband, standing nine meters tall and with a girth of about 40 meters. Izanagi has a small Shinto torii gate To his right is the three point six meter high “wife”, Izanami, which is about nine meters round. Being married, they are joined by the distinctive sacred ropes particular to Shinto shrines and holy places, made of braided rice stalks called Shimenawa. The ropes biding the two rocks weigh almost a ton, and are replaced in a special ceremony held three times a year, in May, September and December. The rope changing ceremonies are deemed important enough to make the news each time. According to Shinto legend, the islands in the Japanese archipelago were born of this couple.

Because of this, it’s not uncommon to see couples praying before the two deities in the hopes their marriage will be as strong and as lasting. Viewing the rocks at dawn is recommended, particularly during the summer months when the sun rises directly between them. The best time can be as early as 4:30am, check with your hotel for the best times, and if conditions are right, you’ll be rewarded with a view of Mt. Fuji in the distance too, providing an amazing memory, and depending on your skill and equipment, some fantastic photos too!

Right next to the best viewing spot for the sacred Meoto Iwa is the equally important Futami Okitama Shrine. Around the shrine are many images of frogs. They line the pathways, rocky cliffs, everywhere you look. It’s said that worshippers would provide the shrine with an image of a frog on having their dreams or wishes come true, and so frogs have become a local lucky charm.

The Futama Okitama Shrine is dedicated to the Goddess of Food, Miketsu, and was once the hiding place of the Sun Goddess, Amaterasu. According to Shinto legend, The Sun goddess fled to the cave following a fight with her brother, and was later enticed out of the cave by the Goddess of merriment, once again  bringing sunlight back to the universe.

There are many small shops lined along the route to the Meoto-iwa and there is also a kilometer long sea wall on which to take a pleasant walk with the sea on one side and hotels and ryokan on the other. A stroll around the region offers a relatively inexpensive and enjoyable day out, with plenty of photo opportunities and nearby attractions such as the aquarium worth visiting too.

Find out more about Meoto Iwa. 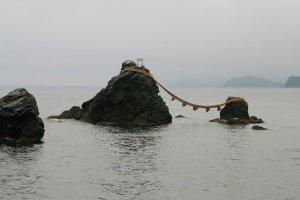 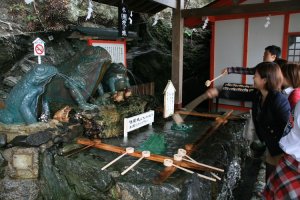 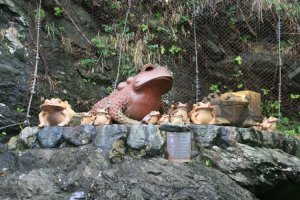