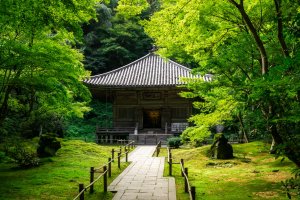 The Entsuin Temple was built next to Matsushima's main temple, the Zuiganji Temple, in 1647 to house the mausoleum of Date Mitsumune, son of the ruling local feudal lord Date Terumune. The temple was built out of mourning and is Kannon, the Buddhist goddess." Dedicated to Mercy, since Mitsumune died a sudden, premature death at the age of 19.

Far back on the temple grounds is the mausoleum, which houses a statue of the young lord on a white horse, surrounded by his most loyal followers, who committed ritual suicide after his death. The interior of the mausoleum is decorated with gold leaf and ornate paintings, which also contain Western symbols such as spades, hearts, diamonds, cross and the oldest Japanese rose image. These symbols were included in the design because the clan had an interest in Christianity and Western technology.

Entsuin, Matsushima in the Snow

Entsuin Garden is a large beautiful zen garden and crafts museum adjacent to Zuigan-ji in Matsushima.

Why not review more places in Miyagi?

Uchi guesthouse is an amazing place to stay in Matsushima in Miyagi Prefecture. Not only are the prices significantly less than..

Hotel Sohkan is a great hotel, especially for families, in Matsushima, Miyagi Prefecture. The four floor hotel comes with conf..

Not far from Sendai in northern Japan's Miyagi prefecture, Shiogama is an interesting little town, with easy access to Matsushima..

Matsushima is famous for seafood but where can you find fresh seafood for affordable prices? Try the Matsushima Fish Market!

Shiogama Wholesale Market is the very last of the great old-school fish markets in the Tohoku region. It miraculously escaped the..

Kameki Sushi is one of many local culinary establishments that has grown in parallel with the success of Shiogama's fishing..

Seiryuzan Zuigan-ji is a Rinzai Zen Buddhist temple in located in the town of Matsushima, Miyagi Prefecture, Japan. Belonging to the Myōshin-ji-bran..

Shiogama Jinja is a Shinto shrine in the city of Shiogama, Miyagi Prefecture, in the Tōhoku region of northern Japan. Known from the ninth century, ..

The Matsushima Foliage Light up is a unique event in Japan that gives you the chance to see an illuminated Zen Garden ablaze with..