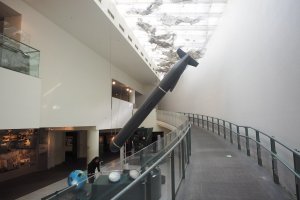 The Nagasaki Atomic Bomb Museum houses artifacts, relics and information related to the tragic atomic bombing of August 9, 1945. It is the sister museum of the museum in Hiroshima, which also depicts the tragedies of atomic war and the suffering of the victims. These two places commemorate the Visitors to the arbitrary nature of the war and the victims of the aftermath.

Many of the objects shown have a rousing effect, such as Burned clothes, broken toys or even a tattered water tower that once stood at Keiho Junior High School, only 800 meters from the hypocenter of the bomb. You can also find out what efforts were made to promote nuclear disarmament in the post-war period.

From JR Nagasaki Station take the tram line, Akasako, and get off at the Atomic Bomb Museum. From here, it's a 5-minute walk.

Visit Nagasaki Atomic Bomb Museum and learn everything about the second atomic bomb that was dropped on Nagasaki, the tragedy ..

Nagasaki Peace Park commemorates the tragic August 9, 1945 bombing that destroyed a significant part of the city and killed tens of thousands of residents...