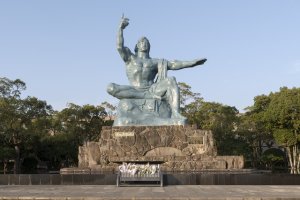 Nagasaki Peace Park commemorates the tragic August 9, 1945 bombing that destroyed a significant part of the city and killed tens of thousands of residents. It is located near the Nagasaki Atomic Bomb Museum and Peace Memorial Hall Erected near Ground Zero of the bombing site, and the remains of Urakami Cathedral can still be seen in the park area.

The Nagasaki Atomic Bomb Museum has set itself the task of educating future generations about the horrors of war. Next to the museum there is a memorial hall for the victims of the atomic bomb.

There is also an area where visitors can take a look at a layer of earth beneath the park's surface where broken roof tiles, bricks and broken glass were left over from the explosion.

In Kyushu in western Japan, Nagasaki Peace Park features the Peace Statue, a huge statue created to commemorate the victims of the..

Sennari Sushi is a traditional sushi bar close to Nagasaki Stationn Kyushu, western Japan. The lunch set is a great bargain for..