A memory for all time

On the 1st of April 1955, the city of Nagasaki unveiled a monument to the 74,000 victims of the world's second atomic weapon used in war. The statue, a giant 9.7 metre bronze one weighing 30 tonnes, has become a focal point of the city's annual Peace Ceremony, held on August 9 each year. The statue itself was designed by the late Kitamura Seibo, a native artist of Nagasaki.

What strikes the visitor most is that Kitamura's creation mimics the power and aesthetics of the world that Japan had found itself pitted against during those tragic years of World War II. The official interpretation of the statue is that the seated man's right arm, pointing straight to the sky, represents the threat of atomic and nuclear weapons. His left arm, extended out horizontally, symbolises peace. The eyes are closed in mourning for the victims.

The sheer size and bulk of Kitamura's work is impressive - you cannot not pay attention to it. But along with this most iconic of memorials visitors to the Peace Park will find many more monuments to peace, harmony and hope in the park's Peace Symbols Zone.

Established in 1978, the zone features works donated by various nations from around the world: these include the Anangu aboriginal communities of Australia's 2016 gift, 'Tree of Life: Gift of Peace'; Turkey's 'Infinity', a figure of a man and woman holding hands donated in 1991; a 2006 work from New Zealand titled 'Cloak of Peace'; and a 1983 statue of a mother protecting her child, from Nagasaki City's sister city of Middelburg in The Netherlands.

Nagasaki Peace Park is a dutiful reminder of the past with a hopeful tinge for a more reasonable future.

Take a tram on either lines 1 or 3 from Nagasaki Station, and get off at Heiwa Koen Station. The park is just a short stroll from the station. 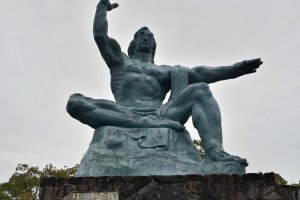 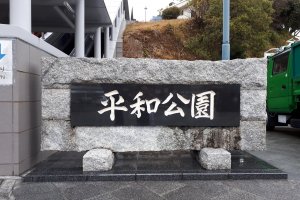 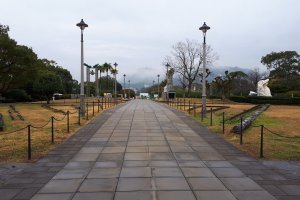 Elena Lisina 2 years ago
Sad place as Hiroshima, but in Hiroshima I was happy to see beautiful and peacefulmodern city. Hope to visit Nagasaki some day.
Reply Show all 2 replies

Sleiman Azizi Author 2 years ago
I've been fortunate enough to visit both. They are the same in very different ways. I'm not sure how to explain it but... well, these things are best left to each visitor, I think.
Reply

Elena Lisina 2 years ago
The impression also depends on weather and time of a day. first I saw Hiroshima Atomic Dome with night lighting and it was scary. But on the next sunny day the impression was different. There were people sitting under blooming sakura and blue sky!
Reply

Kim 2 years ago
I visited Nagasaki for the first time in October last year and I felt very much the same as you - that the park educates you about the past but looks towards a more peaceful future. I think it's such an important thing to learn from, both in Nagasaki and Hiroshima.
Reply Show all 1 replies

Sleiman Azizi Author 2 years ago
I was impressed by the Peace Symbols Zone. I would have thought, though, that there were would be even more nations represented but alas there were not.
Reply
5 comments in total