A world of local atmosphere

Occupying the space between the rarefied pricing of 3-Michelin starred sushi maestros and the cut throat world of corporate 100-yen sushi train restaurants, your average mom & pop operation seems like a world away from the hustle and bustle of tourist world dining.

Mid-range they may be but stepping into one of these bars is to a step into a world of local favour, blue-collar conversation and neighbourhood knowledge. It's about as pure a Japanese culinary tradition as you can hope for. And so spying Sennari Sushi from our hotel room, my son and I decided to stop by for some lunch.

The first thing we noticed on entering was just how complete with history and culture Sennari Sushi was. Mementos from years gone by, Year of the Boar figurines, sumo posters, and more all filled the dining space, giving the bar a sense of lived character that simply cannot exist in a sushi bar driven by quarterly profit-loss statements.

Taking a seat at the counter we ordered the sushi, salad and soup JPY750 lunch set, as well some tuna rolls and kohada gizzard shad for my son. I asked if photos were okay but alas they were not and so we tried to strike up a conversation instead. Perhaps we had come on a tough day but not much was said until my son pointed at the wall behind us. 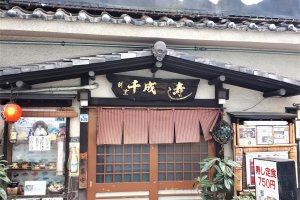 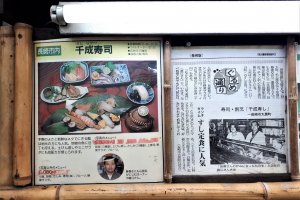 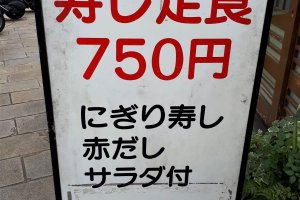