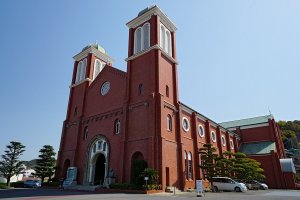 The Urakami Catholic Cathedral is located in Urakami, Nagasaki Prefecture, and was completely destroyed during the atomic bombing of Nagasaki in 1945. Despite the catastrophic loss of the symbol of their faith, the local Catholics urged the local government to allow them to return to the cathedral in the same location In 1959 the building was completed.

Today it is a functioning church housed in a large, red brick European-style building. The cathedral also houses various relics that survived the atomic bomb attack.

There is another fascinating facet of the cathedral's history: construction of the complex began in 1895, right where image-trampling ceremonies had previously been performed, to eradicate Christianity during the period of religious prohibition in Japan. During these ceremonies, people were forced to trample biblical images to expose secret Christians. The church was built in this place as a message of resilience.

A 10-minute walk from Nagasaki Peace Park and the Peace Park (Heiwa Koen) tram stop on lines 1 and 3.

Elv is a quaint cafe, situated in the heart of Nagasaki city. With delicious food and wonderful staff, it is sure to capture y..

Nagasaki Peace Park commemorates the tragic August 9, 1945 bombing that destroyed a significant part of the city and killed tens of thousands of residents...