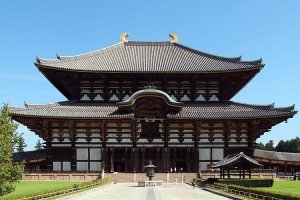 Todai-ji Temple, also known as the Great Eastern Temple, was originally built in 752 at the behest of Emperor Shomu. It is one of the most famous and historically significant temples in all of Japan and one of the landmarks of Nara. The Todai-ji Temple is a UNESCO World Heritage Site.

Until recently, the main hall of Todai-ji, Daibutsuden, was the largest wooden building in the world. The massive structure houses one of the largest cast bronze Buddha statues (Daibutsu) in Japan, which is 15 meters tall.

Another popular attraction is a pillar with a floor-level hole that is exactly the size of the Buddha's nostril. Whoever manages to squeeze through this opening will supposedly reach enlightenment in the next life.

The largest wooden structure in the world and iconic landmark of Nara city.

Todaiji Temple is Nara’s most famous temple that is easily accessed through Nara Park.

In Nara, the annual Tokae Festival gives you the rare chance to see a night-time illumination at Todaiji temple.

Great Statue of Buddha in Todaiji

The story behind the Buddha statue in Todaiji temple

Faces in Todaiji Temple in Nara

Todaiji Temple in Nara prefecture has various impressive figures, not only the statue of the Great Buddha.

Throughout many centuries, a pair of eyes have taken care of Nara. They belong to Big Buddha (Daibutsu), the biggest bronze Buddha..

Designated as a National Treasure, Nigatsu-do (also known as ‘Hall of the Second Month) is located within the famous Todai-ji ..

To the east of the Great Buddha Hall, Nigatsu-do is a beautiful hall that overlooks the city of Nara and provides a view of its..

Kaidan-in, a part of Todai-ji Temple, was once an extremely solemn place where monks-in-training were initiated into Buddhism in..

Never could I imagine that there could be hostels like this one In Nara, Japan

Many reel in terror when the word hostel is mentioned but in Japan this type of accommodation has a whole new meaning. Allow me..

Luxury hotel in the heart of Nara Park, located near Kofukiji and close to Araike lake.

During the summer season, at Kurokawa Honke (黒川本家), located in Nara city, many dishes with arrowroot incorporated, like th..

A Gift of Food from Nara

Nara has a long and rich history, and it shows in the amazing variety of food unique to the area.

The great Kasuga Shrine (Kasuga Taisha) is located in Nara Park. It was built at the same time as the capital and is dedicated to the deity responsible..

NARA Visitor Center & Inn is located by the Sarusawa Pond in Nara City, a short walking distance from Kintetsu Nara station and Nara station. It is the..