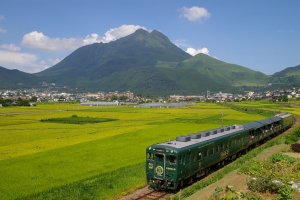 Mount Yufu is a stratovolcano located on the border of Yufu and Beppu in Oita Prefecture, Kyushu. The summit reaches a height of 1,583.3 meters (5,195 feet) and there are two peaks, both popular for hiking; Higashi-mine Peak in the east and Nishi-mine Peak in the west with the latter being one meter taller.

The two peaks resemble the humps of a camel overlooking Yufuin City. The paths are clearly marked and it makes for an easy to intermediate hike. It takes about two hours to reach either peak and an hour and a half to descend. Many hikers elect to visit both peaks in one day. There are also sites at the base of the mountain that hand out free trail guides to would-be hikers. Higashi-mine is the easier of the peaks to climb, while there is a level of difficulty in reaching the peak of Nishi-mine and is advised for more experienced hikers. From the saddle between both peaks, it is a fifteen-minute hike to either peak.

Autumn seems to be the high-season for hikers to visit and admire the many-colored leaves along the trails as well as the sweeping vista from the summit.

When the trail is getting a little steeper and a bit rocky, you will have almost reached the saddle between the two peaks. Now there..

A Day on Mt Yufu

Mt Yufu, the dual-peaked mountain that looms over Yufu City, makes for an excellent day hike in the warmer months,

Why not review more places in Oita?

Experience a unique and immersive relaxation experience designed to offer a distinct sense of place at Beppu's first international..

Beppu, in Oita Prefecture, is known for having many onsen facilities. The area also allows you to harness this geothermal energy..

Beppu's Jigoku Mushi Kobo--“steamed dishes from Hell’s kitchen”--will give you a food experience you can’t get anywhere el..

Kinrin Lake is located in Yufuin Onsen in Oita Prefecture. The name Kinrin means" "Golden Fish Scale" "The source of this name is the fish swimming in..

Umi Jigoku ("Sea hell") is one of Beppu's seven 'Hells', renowned hot spring attractions known for their unique natural appearances (not bathing!). The..