One mountain, two peaks – the choice is yours

I guess we were lucky with the weather, which always helps when you go hiking, but climbing a very distinctive looking mountain has always something. I am talking about Yufu-dake, or Mount Yufu (1,584 m), which watches over the small but charismatic town with the same name (or Yufuin in Japanese).

The distinctive feature of Yufu-dake is that it has two peaks, and they actually look like a camel’s humps. You can climb both of them, and as they are really close together, you could easily do that in one day.

It is a relatively easy hike, although it takes about two hours to get to whichever peak, and 1.5 hours to go down. However, it is not very steep for the most of the time and the path is clearly marked; there is no way you can get lost. If you still want to be on the safe side, get a free trail map at the tourist information in Yufuin.

The start point of the hike lies along Route 11, the direct road from Yufuin to Beppu, about a 20- minute drive from Yufuin. There are a bus stop, free parking and public toilets. The spot is called Yufu-tozan-guchi (由布登山口, 896 m).

After crossing the plain towards the bottom of Yufu-dake, you will spend the first hour walking through the forest, a gentle and clear path, birds singing along the way. There is a fork pretty much where the forest starts; keep going towards Goyagoshi (合野越), a small clearing before the switchbacks begin, steadily upwards. When leaving the forest the views become fantastic along the whole way. Believe me, that makes you forget any climbing effort.

When the trail is getting a little steeper and a bit rocky, you will have almost reached the saddle between the two peaks. Now there is a choice to make. Both peaks are just another 15 minutes away, but while the right one (Higashi-mine, 東峰) is relatively easy to tackle (some rock scrambling necessary though), the left one (Nishi-mine, 西峰) involves some more serious climbing using the chains provided. So you choose; the views are fantastic from either of them. Hopefully you have brought a sandwich or a bento box; you will be hungry! Then take the same way back and relax your muscles in one of the public hot spring baths in the city.

Some trail maps show a path leading down directly from Higashi-mine (without going back to the saddle); however, we couldn’t find any trail. We also heard about an alternative (but longer) trail starting from Yufu City, but we were discouraged to take it by the tourist information. I assume it is just not well maintained.

We climbed early in the season (beginning of April), so the surrounding pastures still looked a bit dry. However, we could well imagine the lush green of the entire area. The best time to climb probably starts around the end of April. Last but not least, be aware that about two thirds of the trail are very exposed to the sun, so make sure you have some sunscreen and a hat. We actually got a little sunburned.

Find out more about Mount Yufu. 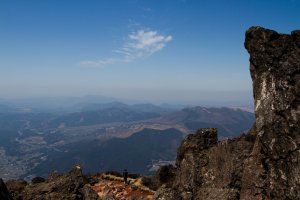 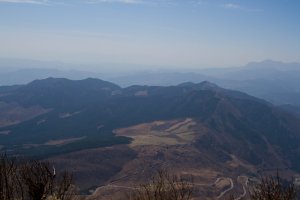 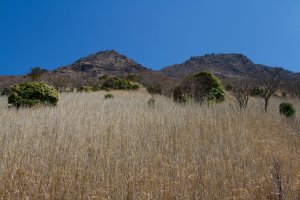 Kim 4 years ago
My husband and I are avid hikers and will be in the area next month so this looks perfect! Thanks for sharing!
Reply Show all 0 replies

Nicole Bauer Author 8 years ago
Thank you, I am glad you like it! If you are looking for more photos how the mountain looks like from the bottom, click on the link "Mount Yufu" in the beginning of the article. Cheers!
Reply Show all 0 replies